Trident Energy has edged a step closer towards the acquisition of Petrobras’ Campos Basin assets Enchova and Pampo for a price of around $1 billion.

Petrobras first announced the intention to sell the fields back in 2017. In 2018, the Petrobras said that Ouro Preto Óleo e Gás had been the best bidder, reportedly offering around $1 billion.  According to Reuters, Trident Energy had at the time allegedly placed a bid as well, but Ouro’s was a better one.

However, the deal between Ouro and Petrobras later collapsed after Ouro reportedly reduced its offer.

Petrobras said that the transaction was not yet complete and was in its final stages of approval “by Petrobras´ competent bodies.”

“[The sale] is in line with the company’s portfolio optimization and improvement of capital allocation, aiming at creating value for our shareholders,” Petrobras said.

The Enchova package is located in shallow water at a distance of about 90 km from the coast with reservoir depth between c.1,800 to 2,600m. The Enchova cluster contains Bicudo, Bonito, Enchova, Enchova Oeste, Marimbá and Piraúna concessions and Pampo Cluster includes Badejo, Linguado, Pampo, and Trilha concessions.

Oil from the Enchova cluster is produced via five platforms, one fixed and four floating. Oil and gas are exported through pipelines to Cabiúnas, the gas processing plant, located onshore.

The Pampo cluster sits in shallow water at a distance of about 80 km from the coast with reservoir depth between c.950 to 2,950m. Oil is produced through two platforms, one fixed and one floating.

Oil and gas are transported through pipelines to platform PCE-1 in the Enchova field, and subsequently to the Cabiúnas gas processing plant located onshore. Both Enchova and Pampo licenses expire in 2025 with the potential to extend.

The buyer, Trident Energy, is a private company backed by Warburg Pincus, focused on buying and operating mid-life oil fields. The company acquired its first assets in Equatorial Guinea in 2017 when it bought the Okume and Ceiba fields from Hess. 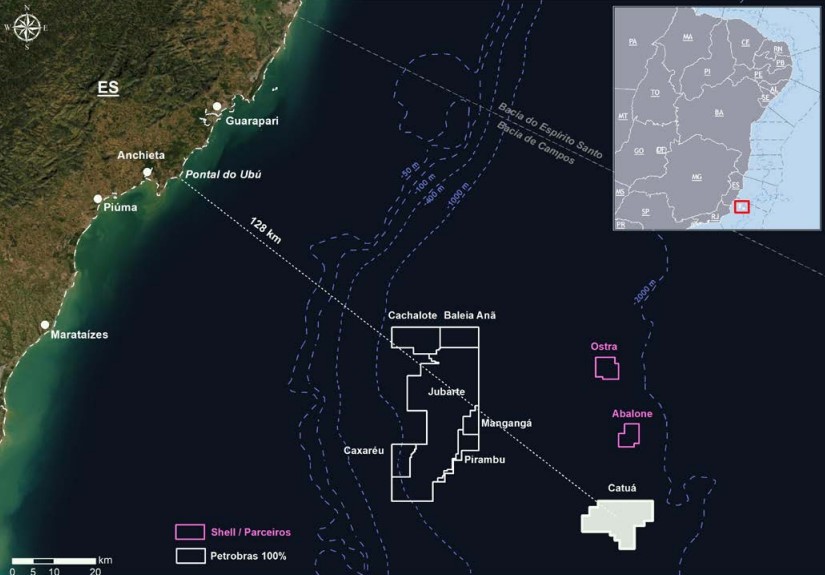