EnQuest PLC has entered into an agreement with the Kuwait Foreign Petroleum Exploration Company (‘KUFPEC’), by which EnQuest will farm out a 35% interest in EnQuest’s Alma and Galia oil field developments (‘Alma/Galia’) to KUFPEC.

Under the agreement, which is subject to regulatory approvals, KUFPEC is to invest a total of approximately US$500m in cash (around £300m), comprised of up to $182m in future contributions for past costs and a development carry for EnQuest, and of KUFPEC’s direct share of the development costs.

“EnQuest is pleased to be working with KUFPEC again and to have them as our partner in the Alma/Galia development. With start up planned for late next year, the project team is well advanced in the execution phase and our first Alma well has reached ‘TD’ (total depth) with good results.”

“In keeping with KUFPEC’s strategic objective to acquire quality production and reserves, we are pleased to re-enter the North Sea through EnQuest’s Alma and Galia project. The North Sea transaction flow activity affords KUFPEC an opportunity to grow a material business through alignment with valued partners such as EnQuest.”

“This is good news for North East Scotland and the whole of the UK. At the Budget, the Government set out ambitious measures to stimulate billions of pounds of new investment in the North Sea, increasing production and creating jobs. Today’s deal between EnQuest and KUFPEC, bringing up to £300m of foreign investment into the North Sea, proves that the UK continental shelf remains an attractive prospect. The Government will continue working with the industry in the North Sea to get the most of what is a huge national asset.”

Further details of the transaction

KUFPEC will pay its pro rata share of costs effective from 1 January 2012 and will also pay up to $182m in future contributions for past costs and development carry, in relation to EnQuest’s remaining interest in Alma/Galia. The capital cost of the project is being revised to include some additional costs relating to increased scope, intended to extend the life of the oil field. EnQuest anticipates costs of the development of approximately $1bn. If KUFPEC does not recover its costs by 1 January 2017, then it will receive 50% of revenue less operating costs until those costs have been recovered.

EnQuest previously announced that it anticipated peak production of over 20,000 Boepd from Alma/Galia, following first oil, expected in Q4 2013; this was based on EnQuest having a 100% interest in Alma/Galia. Whilst the farm out significantly enhances the economics of the project, by farming out 35% of the gross production EnQuest will therefore reduce its net production, by approximately 7,000 Boepd in 2014 and by approximately 1,750 Boepd in 2013. EnQuest’s overall company net production outlook will similarly be reduced.

The Alma field, previously known as the Argyll field was the first oil field to be developed in the UK North Sea. Alma was previously abandoned at a relatively low water cut of 70%, using the technology available at the time. First production is anticipated in Q4 2013, with peak gross production of over 20,000 Boepd. Alma/Galia is estimated to contain a gross 29 MMBoe, in 2P reserves. The development is planned to consist of 7 production wells and 2 water injection/disposal wells, tied back to the modified EnQuest Producer, FPSO vessel. The development plan is designed to be capable of processing high water cut levels up to 95%. 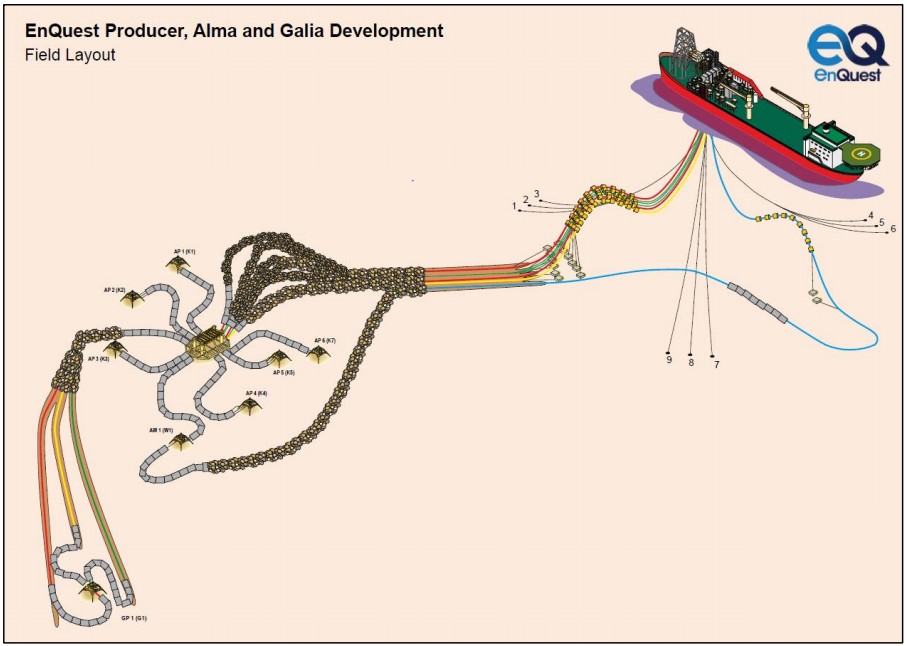