For hydrographic surveys in shallow inshore waters such as rivers, canals, lakes and ponds, access to the site can sometimes be the biggest headache of the entire survey. Driving a boat trailer to the survey site requires a wide access point and a convenient place to launch the boat.

The boat launch site may be miles from the actual survey location. In extreme cases, the survey boat may have to be delivered to the survey site from underneath a helicopter! For very shallow water there is the added problem of ensuring the boat draft is enough to reach all of the survey area and obtain the specified coverage.

To address these challenges, The Oceanscience Group (San Diego, CA) has recently launched the Z-Boat 1800 portable remotely-operated survey boat that brings high quality positioning and depth sounder instruments together on a convenient remote platform that can be launched and operated from practically anywhere. The Z-Boat represents Oceanscience’s continued investment in new products for the hydrographic survey industry, and is the first in a new line of remote survey systems to be released in 2012. The boat was revealed at the January 2012 HYPACK conference in San Diego, followed by a trip to London for a first outing in Europe at the Oceanology 2012 exhibition where it caused quite a stir.

Early adopters of the Oceanscience system include surveyors from Shafer, Kline & Warren (Lenexa, KS). The SKW team was faced with performing multiple cable route surveys in rivers with little or no access for a manned boat. For the relatively short river cross-sections, mobilizing a conventional survey boat was an expensive proposition that would have made the job impossible to perform in a cost-effective manner. Instead, the Z-Boat 1800 was deployed from the shore, between the fallen trees and logs. High quality survey data obtained using the Seafloor Systems SonarM8 single beam depth sounder and Trimble R8 RTK GPS were recorded on the shore without setting foot on the water. Hydrographic surveyor Scott Corwine of SKW was enthusiastic from the start, “It worked perfect! These areas were remote making it impossible to use an aluminum boat and motor. The current was too swift for the safety of our crews. The access was too muddy for a truck. We strapped the Z-Boat to the back of a side by side ATV and away we went!”

Oceanscience has been developing remote boats for nearly a decade. According to Adrian McDonald, Senior Sales Executive “the Z-Boat is the latest in a line of high performance instrumentation boats. Previous Oceanscience remote boats were used almost exclusively for current profiling and river discharge measurements; adding the capability to perform high quality bathymetry was a natural progression for us and opens up a significant number of opportunities for us to make surveyors lives easier. Oceanscience’s mission is to make our customers’ data better or easier to collect, but ideally both at the same time!” 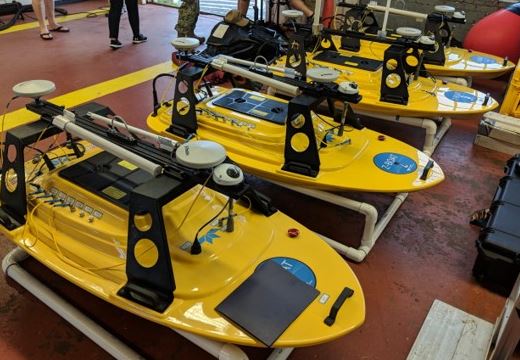