Vice Chief of Naval Operations Adm. Mark Ferguson will deliver the ceremony’s principal address. Susan Ring Keith, a long-time leader in the San Diego community, will serve as ship’s sponsor. The ceremony will be highlighted by a time-honored Navy tradition when Keith gives the first order to “man our ship and bring her to life!”

Designated LCS 4, Coronado is the fourth littoral combat ship and the second of the Independence variant. Named for Coronado, Calif., it is the third Navy ship to bear the name. USS Coronado (LCS 4) will be outfitted with reconfigurable mission packages and focus on a variety of mission areas including mine countermeasures, surface warfare and anti-submarine warfare.

The first USS Coronado (PF 38) was a patrol frigate and served as a convoy escort during World War II. The subsequent Coronado (AGF 11) was designed as an Austin Class Amphibious Transport Dock (LPD) and was reconfigured to be an Auxiliary Command ship (AGF) in 1980 and subsequently served as the commander, Middle East Force flagship, then the commander, U.S. Sixth Fleet flagship in the Mediterranean, and subsequently the commander, U.S. 3rd Fleet flag ship in the Eastern Pacific Ocean prior to decommissioning in 2006. 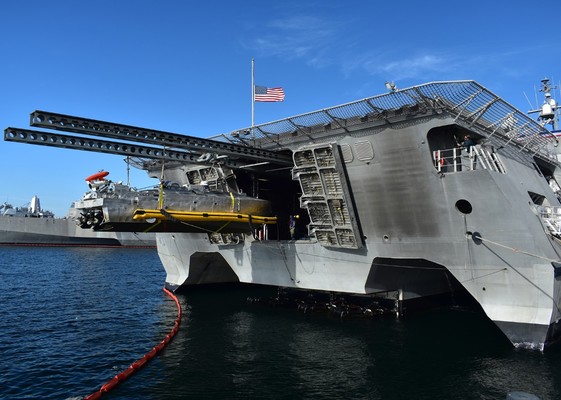