The Grimaldi Group has taken delivery of Eco Savona, the fourth of the twelve ultra-modern hybrid Ro-Ro units of the Grimaldi Green 5th Generation (GG5G) series ordered from the Jinling shipyard.

The hybrid ro-ro ship has a length of 238 meters, a beam of 34 meters, a gross tonnage of 67,311 tonnes, and a service speed of 20.8 knots. These dimensions make the series the largest Ro-Ro units in the world for short-sea shipping.

If compared to the group’s units of the previous series of Ro-Ro vessels for short sea shipping, the new ship can accommodate double the load on her seven decks. Specifically, Eco Savona can carry 7,800 linear meters of rolling freight, equivalent to around 500 trailers and 180 cars.

During port stays, Eco Savona is capable of cutting emissions to zero by using the electricity stored in mega lithium batteries with a total power of 5 MWh, which are recharged during navigation thanks to shaft generators and 350 m2 of solar panels.

The vessel is also equipped with electronically controlled engines and with an exhaust gas cleaning system.

“It is a source of great pride for us to be able to put increasingly capacious, modern and environmentally friendly ships such as the Eco Savona at our customers’ disposal,” said Emanuele Grimaldi, Managing Director of the Neapolitan company.

“The future of transport can only be based on eco-sustainability and efficiency, and also thanks to our group’s commitment this future is ever closer”.

Upon arrival in Italy from China next April, Eco Savona will be deployed on the regular Ro-Ro service that connects Italy to Spain.

Deliveries keep coming as Grimaldi ups the ante on the newbuilding front.

Namely, last month the company signed an agreement worth over $500 million with Ulsan-based Hyundai Mipo Dockyard for the construction of six new Ro/Ro multipurpose vessels. 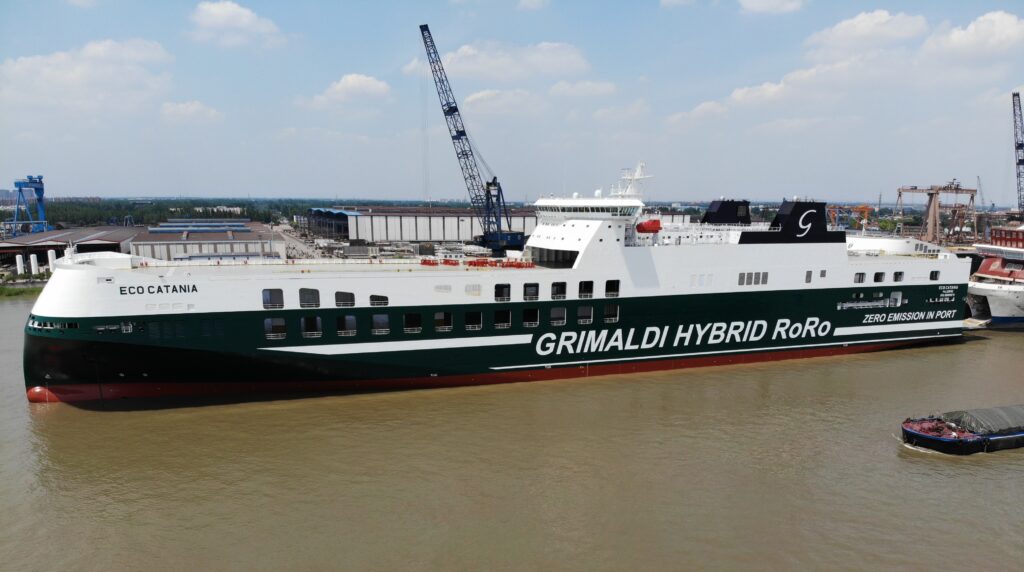