Seven crew members of the Panama-flagged general cargo ship Tahsin who were abandoned in June this year and were faced even with lack of fresh water have been repatriated.

The ship was detained in June by the UK Maritime and Coast Guard Authority (MCA) on the grounds of multiple issues, including unpaid wages for three months. The ship had nine crew members on board, five from Turkey and two from Georgia and India respectively.

According to the data from the International Labour Organization (ILO), the breaches included lack of fresh water and no showering facilities.

The crew members were being paid wages below ILO minima- USD 250/month.

Following the intervention from the International Transport Workers’ Federation (ITF), seven crew members, 3 Turkish, 2 Georgian and 2 Indian crew members were repatriated by their company in July, while the Master remained along with the cook who had only joined the vessel a week earlier.

The ship is owned by Voda Shipping, the same company that owns Seccadi and Reggae, which have been entangled in similar cases of crew abandonment in the UK this year.

The crews of both ships are reported to have been repatriated and paid this July.

“We now consider these UK abandonment cases to be resolved,” ITF’s expert on crew abandonment Katie Higginbottom said commenting on the cases.

Seven new crew came on board  Tashin between 13-18 June.

Based on MCA’s data on detained ships in the UK for July, Tashin remains on the list, together with the Seccadi and Reggae. 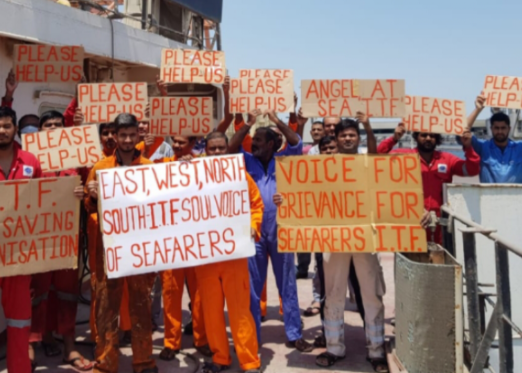