U.S. shipbuilder Aker Philadelphia Shipyard, Inc. (APSI) has concluded the buy-out agreement with a subsidiary of Marathon Petroleum Corporation (MPC) for APSI’s interest in its joint venture with Crowley Maritime Corporation related to the operation and chartering of four 50,000 dwt product tankers.

The transaction is based on an enterprise value of USD 150 million per vessel.

Aker Philadelphia Shipyard ASA said that the buy-out of APSI’s interest in the APSI-Crowley joint venture with respect to each vessel will occur at their delivery from APSI. The deliveries of all four vessels are expected to occur from Q3 2015 to Q3 2016.

APSI expects to recognize a pre-tax gain of approximately USD 10 million per vessel from the transaction. The shipbuilder will make an investment in the vessels during their construction, but will no longer maintain the previously planned long-term investment in the vessels post-delivery, which was expected to be approximately USD 110 million in the aggregate.

“This transaction is an important part of AKPS’s plan to divest its shipping investments and realize the value created for shareholders,” remarked Kristian Rokke, Chairman of AKPS. “We are proud of what we have accomplished together with Crowley under the joint-venture and look forward to serving both Crowley and Marathon Petroleum as shipbuilders into the future.”

All four of the vessels subject to the transaction are under construction. APSI has also begun construction of the first two of four additional 50,000 dwt tankers for a subsidiary of Kinder Morgan, Inc., which are planned to be delivered between November 2016 and November 2017.

The shipyard also has contracts for two 3,600 TEU containerships for Matson Navigation Company, Inc., which are planned to be delivered in 2018. On July 16, 2015, the company announced that it intends to change its name to Philly Shipyard by the end of the year, pending shareholder approval. 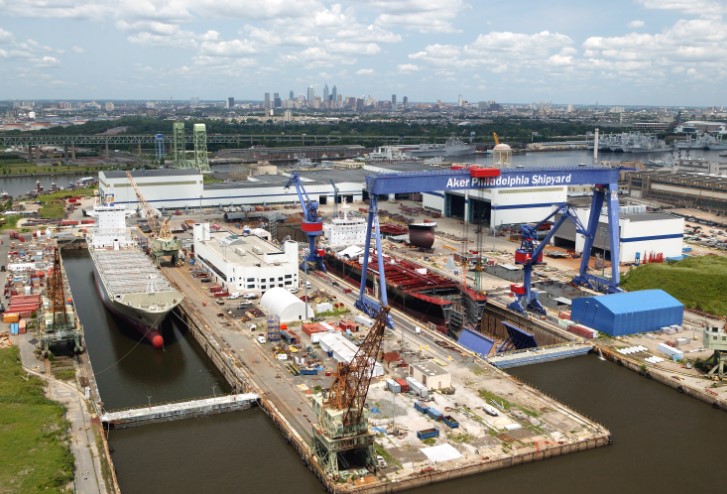