BladeRunner Energy, in collaboration with the Alaska Center for Energy and Power (ACEP), has launched and tested its first full-scale hydrokinetic prototype in Alaska.

The BladeRunner design places the turbine rotor at the end of a flexible but torsionally stiff cable that allows the turbine to submerge while keeping the generator housing on the water surface.

This system architecture aims to address the multiple hurdles that exist for deploying hydrokinetic devices in remote riverine locations, with the management of debris being a key factor.

It also collected data for validating the computational fluid dynamic models used to develop the rotor design. All of this information will feed into an iterative co-design process over the next two years, according to ACEP.

“The BladeRunner offers distinct advantages, namely, the rotor design and tethered connection should be debris resilient; the generator system is above the waterline, providing for cost-effective deployment and maintenance and increasing reliability of bearings and seals; the rotor can be scaled to fit a given river resource; and the system can be deployed from shore with no boats or on-water equipment needed”.

Moriel Arango, co-founder of BladeRunner, added: “As was expected, the testing helped to identify a number of factors that need to be addressed, but that was the whole point of testing. We are excited about where this SHARKS program will take our system design, and getting the insight through testing in the Tanana River will make it so much more valuable than what comes from testing in a controlled laboratory setting”.

The testing was conducted as part of the Submarine Hydrokinetic and Riverine Kilo-megawatt Systems program, as one of 11 projects awarded under $35 million in funding from the U.S. Department of Energy’s Advanced Research Projects Agency-Energy (ARPA-E) to develop high-risk, high-potential approaches to riverine and tidal energy.

University of Alaska Fairbanks (UAF) is the prime awardee on this award, leading the testing and co-design activities. UAF has subawards to BladeRunner Energy for the rotor and system development and to C-Motive Technologies for novel generator development.

Also, Moshman Research is working with BladeRunner on rotor development and optimization. FibreMax is supplying the custom torsional cables, and LifeWater Engineering fabricated the generator housing. 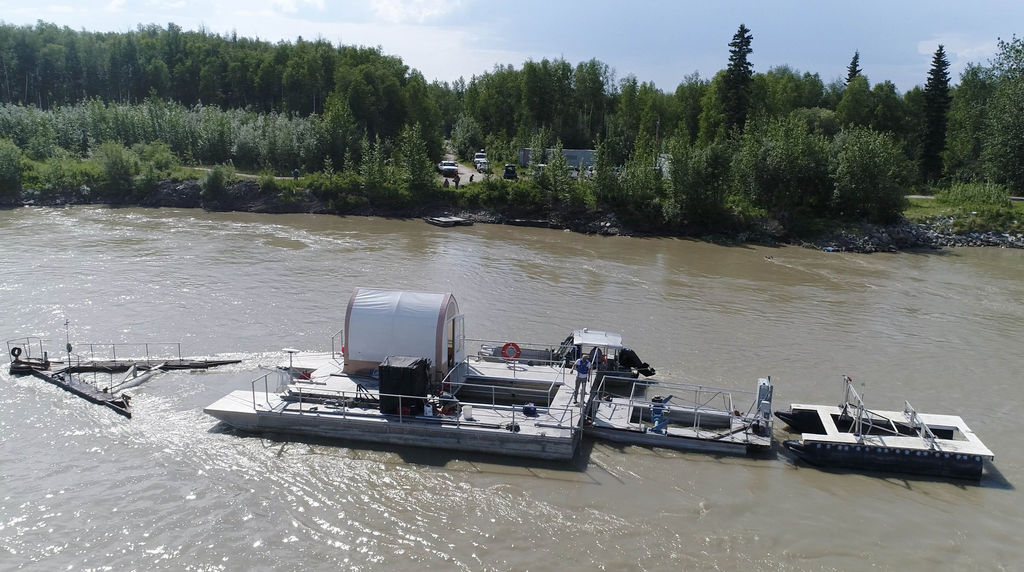