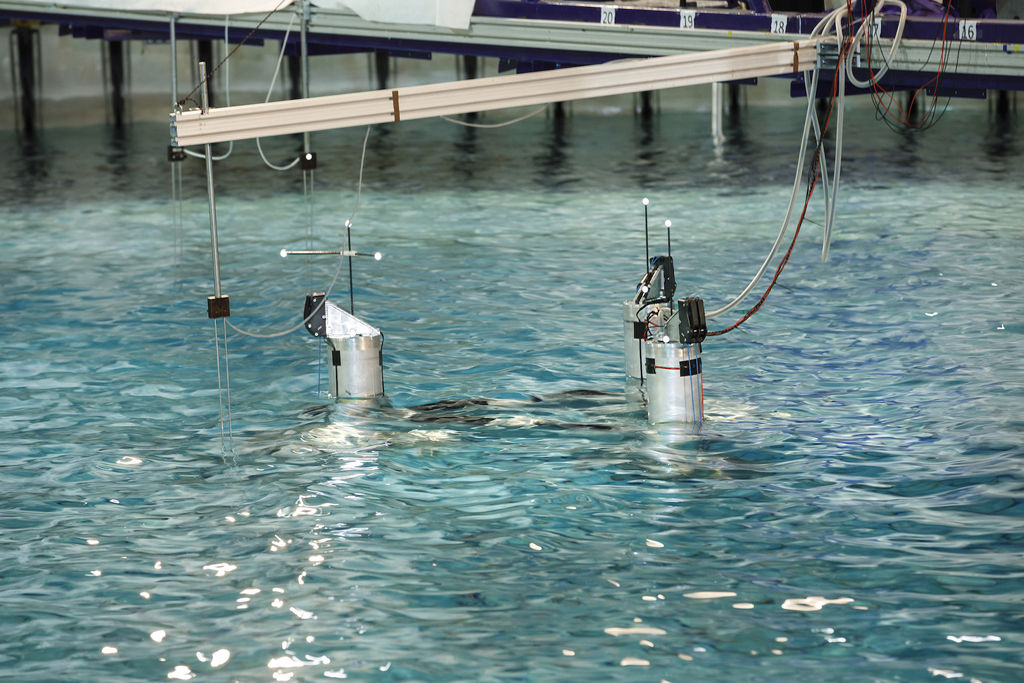 Bombora Wave Power has completed tank testing of its floating foundation system suitable for the InSPIRE solution, which combines the mWave wave energy technology with a wind turbine onto a single floating offshore platform.

As part of the EuropeWave project, an adapted version of the semi-submersible INSPIRE platform, developed in partnership with TechnipFMC, underwent tank testing evaluations to confirm the system loads and dynamics at the FloWave test facility at the University of Edinburgh.

The tank testing program at FloWave follows the pre-FEED phase of the InSPIRE project completed earlier in 2022, based on the integration of a 4MW mWave solution with a 10MW wind turbine on a single semi-submersible floating foundation system.

Peter Arnold, head of loads and modelling at Bombora, said: “The integrated platform was rigorously tested under a wide range of conditions, including extreme waves. Final analysis is currently underway, where the results of the wave tank test are compared with those predicted using computational modelling.”

According to Arnold, the tank testing assessment will provide essential optimization data leading to a detailed design of the combined InSPIRE mWave and wind wave platform due to commence early in 2023.

Major opportunities lie in the rapidly emerging floating offshore wind market, with the world’s largest wind industry body, The Global Wind Energy Council, predicting more than 16GW of floating wind turbines will be in the water by 2030, according to Bombora.

Dave Rigg, Bombora’s chief operating officer, said: “By integrating wave and wind we can deliver more megawatts per square mile, providing a higher yield for seabed lease areas. Due to its smooth, consistent and predictable power profile, mWave technology works as a natural partner to wind, helping to counter its intermittency and improve the overall power generation profile, ultimately bringing greater stability to the grid.

“In addition, this type of integrated design helps optimize project costs and ultimately Levelized Cost of Energy (LCOE).  The mWave and wind turbine share a large amount of the project infrastructure including the floating platform itself, the mooring solution along with the export cables and grid connection. The InSPIRE platform can also be maintained using the readily available service vessels catering to the existing fixed bottom wind and offshore oil and gas industries.”

In recent weeks Bombora entered the final test and assembly phase of the £20million Pembrokeshire Demonstration Project, as it prepares to validate its 1.5MW mWave wave energy converter.

The flagship demonstration project aims to prove the reliability, performance and competitiveness of Bombora’s mWave technology, while further informing the InSPIRE project and a series of other global initiatives in Bombora’s pipeline.

Bombora’s managing director Sam Leighton said: “Working alongside our InSPIRE project partners, our vision is to build knowledge and confidence in this new form of ground-breaking integrated offshore energy technology. We have a clear roadmap to commercialization and achieving a highly competitive Levelized Cost of Energy (LCOE) of €60 per MWh as the technology attains commercial scale. The successful demonstration of the Pembrokeshire Demonstration Project will significantly de-risk the technology and pave the way for large-scale commercial projects in deep waters.”

To remind, Bombora was one of seven technology developers awarded contracts for the first phase of the EuropeWave project, which will ultimately see three prototype technologies tested at the European Marine Energy Centre (EMEC) in Orkney and the Biscay Marine Energy Platform (BiMEP) in Spain.