During the past six months, China’s oil and gas player CNOOC Limited has worked on ramping up its hydrocarbon production and as a result, its oil and gas output reached record-high levels while several new discoveries were announced in this period. Thanks to these efforts and high energy prices, the firm doubled its net profit.

The increase in production is in line with CNOOC’s 2022 Business Strategy and Development Plan, which was revealed in January 2022. This roadmap outlines plans to scale up oil and gas production in the next three years while advocating green energy transition initiatives.

Within its 2022 interim results for the six months ended on 30 June 2022, CNOOC disclosed on Wednesday that it had put in “great efforts” to increase oil and gas production and this led to net production hitting a record high in this period, reaching 304.8 million boe. This represents a year-on-year increase of 9.6 per cent.

Furthermore, the Chinese player outlined that the decline rate of producing oilfields in China was brought under “effective control” while overseas, the net production exceeded the set goals. The company confirmed that new projects such as Weizhou 12-8E oilfield development project and Liza Phase II in Guyana were commissioned during the first half of 2022. On the other hand, other projects under construction – Enping, Lufeng and Kenli – have progressed steadily, says CNOOC.

In the first half of 2022, the Chinese giant’s focus on hydrocarbon exploration and development paid off when it made two “middle-to-large-sized” discoveries – Bozhong 26-6 and Bozhong 19-2 – offshore China. Overseas, five new discoveries were made in the Stabroek block in Guyana where the firm holds 25 per cent interest. Two of these discoveries were reported in January 2022, while the remaining three were announced in April. CNOOC highlighted that the recoverable resources of the Stabroek block have reached approximately 11 billion boe.

The firm also emphasised that it has organised its production to “seize the favourable time window of high oil prices, thereby recording the highest net profit and revenue so far.” Therefore, the oil and gas sales revenue reached RMB 176.68 billion (around $25.8 billion) in the first half of the year, up by 75.6 per cent on a year-on-year basis. The net profit attributable to CNOOC’s equity shareholders reached RMB 71.89 billion (about $10.5 billion), representing an increase of 115.7 per cent. During this period, the company’s capital expenditure amounted to approximately RMB 41.6 billion (over $6 billion) – an increase of 15.4 per cent – which “provides strong support for future reserves and production growth.”

Wang Dongjin, Chairman of CNOOC, remarked: “In the first half of 2022, the external environment was complicated. The company seized the favourable opportunities and made proactive moves to reach record-high operating results. We will pay close attention to the international situation and industry trends. We will continue to pursue high-quality development, so that, we can reach the goals we set at the year beginning and create more value for shareholders.”

Moreover, the Chinese firm completed its first RMB share issuance in April and was listed on the main board of the Shanghai Stock Exchange. The move came following the delisting by the New York Stock Exchange in October. According to CNOOC, the IPO will broaden the financing channels for its sustainable development while adding high-quality investment targets to China’s capital market.

Additionally, CNOOC installed the Haiji-1 jacket platform, “the first deepwater jacket in Asia, independently designed and built.” The company also added that the first set of shallow-water subsea wellheads and Christmas trees and the first set of deepwater subsea wellheads and Christmas trees passed sea trials. Based on CNOOC’s statement, the application of shore power at the Qinhuangdao 32-6 oilfield helped to build it into the benchmark project of offshore “smart oilfields” and created a new model of “intelligent, safe and efficient” exploitation of offshore oil and gas resources.

The Chinese company also stated that it has started the construction of the Wenchang deep-sea floating wind farm demonstration project, “utilising domestic technologies.” 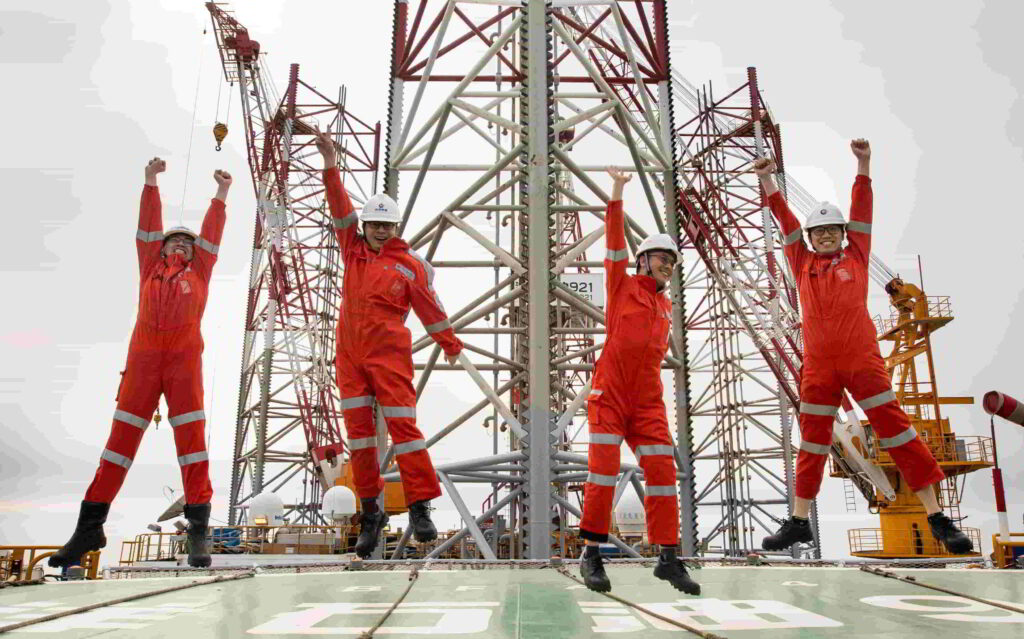 Oilfield project in Bohai Sea comes on stream
Posted: 13 days ago
Two gas projects off China come on stream ahead of schedule
Posted: 25 days ago
New gig for Stena drillship off Gabon
Posted: 10 days ago