CMA CGM BALI, a 15,000 TEU LNG-powered containership was deployed on the MEX 1 service, connecting Asia and South Europe. The ship was refueled by TotalEnergies’ Gas Vitality, with around 6,000 cbm of LNG, by means of a ship-to-ship transfer alongside the Eurofos container terminal. During the bunkering operation, the containership carried out cargo operations simultaneously, the company revealed.

Marseille is the first LNG bunkering hub in France for shipping, for all the Mediterranean and South Europe area, and the third one to be created by CMA CGM after Rotterdam and Singapore. Earlier on, CMA CGM signed an LNG bunkering service deal with Chinese terminal operator Shanghai International Port Group (SIPG).

“This LNG bunkering operation is an important milestone for our group, in many ways. It sets France and Marseille maritime and port cluster on the frontline for the decarbonization of shipping. It enhances LNG solutions as the first step of a broader industrial strategy that will take us to alternative fuels such as biomethane and e-methane,” Christine Cabau, Executive Vice President Operations and Assets of the CMA CGM Group said.

“This landmark operation also demonstrates our continued support to the growing role of LNG in shipping’s energy transition. In line with TotalEnergies’ climate ambition, we will continue to work hand-in-hand with our industry partners to develop and scale up new, lower-carbon and ultimately, zero-carbon fuel solutions for shipping,” added Jérôme Leprince-Ringuet, Vice-President Marine Fuels at TotalEnergies.

By the end of 2024, CMA CGM Group will have a fleet of 44 LNG-powered vessels, “e-methane ready” and of various sizes while 24 of them are already in service. Recently, the CMA CGM’s LNG-fueled fleet welcomed CMA CGM Everglade, a 15,000 TEU LNG-powered container ships built at the Chinese Jiangnan Shipyard.

The engines deployed on these vessels have the technical capability of using bio-methane (already in use) and e-methane, a carbon-neutral fuel, “making them simultaneously an immediate and long-term solution to the challenge of decarbonization.” 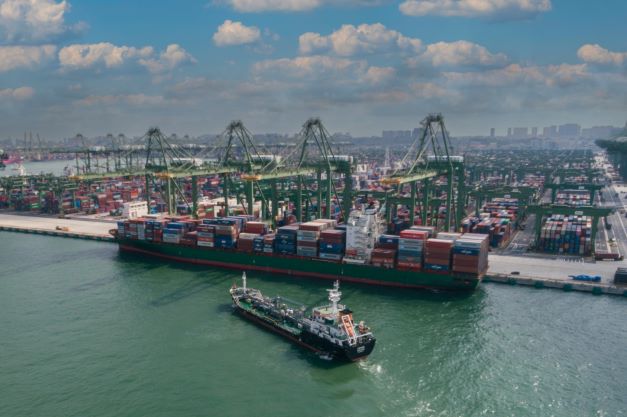