Revenues and expenses for Q2 2011 and Q2 2010 are difficult to compare as several changes in the operating performance of the Ocean Bottom Node (“OBN”) activity and the utilisation of the 2D/3D fleet in these two quarters have affected the numbers.

Consolidated revenues for the SeaBird Group was USD 44.1 million in Q2 2011, up from USD 21.2 million in Q1 2011 and USD 37.6 million in Q4 2010. The increased revenues are mainly due to the OBN survey commencing on Rosebank 2 from 20 April 2011, following mobilisation, while the two vessels working with OBN were idle during most of Q1 2011. Also revenues contribution from the 2D fleet improved during this quarter by USD 4 million compared to the previous quarter, as more vessels were back in operation following extensive idle periods in Q1 2011 and Q4 2010. Multiclient sales in Q2 2011 were USD 2.9 million compared to USD 1.0 million in Q1 2011.

Operating expenses increased during Q2 2011 to USD 30.1 million from USD 23.6 million in Q1 2011. The increase refers to improved utilisation and consequently several vessels moving from idle mode with reduced cost in Q1 2011 to full operating cost in Q2 2011. In addition, the M/V GGS Atlantic joined the 2D fleet from 20 May 2011 as part of the frame agreement with Spectrum.

Earnings before interest, taxes, depreciation and amortisation (“EBITDA”) were positive at USD 8.2 million in Q2 2011 against a negative EBITDA of USD 8.7 million in Q1 2011.

General and administrative (“SG&A”) expenses are reduced to USD 5.9 million in Q2 2011 compared to USD 6.3 million in Q1 2011. SG&A is continuing at the same level at about USD 6 million as in previous quarters (excluding write off for bad debt). The higher costs in Q1 2011 were mainly due to additional legal cost for debt refinancing.

An impairment adjustment for Geo Mariner will be recorded in Q3 2011 when the potential sales value of the vessel and values of various seismic and other equipment moved to Voyager Explorer and other SeaBird vessels are clarified.

Interest expense is up by about USD 2.4 million in Q2 2011 to USD 6.0 million, mainly due to the interest of 9% on the convertible loan in favour of PGS from 22 February 2011 and increased margin on bank loans as a result of extended maturity from 16 March 2011.

Other financial expenses of USD 4.0 million refer mainly to unrealised currency exchange losses of USD 2.0 million on the two NOK based bond loans totalling NOK 481.75 million and restructuring fee of USD 1.2 million for extending maturity on the bank debt.

Capital expenditures were USD 7.0 million in Q2 2011 compared to USD 1.2 million in Q1 2011. Major capital cost items refer to the 60 new nodes for Hugin Explorer and classification cost for this vessel.

A weakening of USD against NOK and EUR has in general a negative impact on the operating expenses, interest expenses and gross debt as SeaBird has significant costs in other currencies than USD and bond loans of a total of NOK 478 million.

The OBN operation with Hugin Explorer deploying and retrieving nodes and Munin Explorer as source vessel mobilised for the Rosebank 2 survey west of Shetland for Chevron North Sea Limited in March-April 2011. The operation commenced on 20 April 2011 following classification work at a Danish yard during this mobilisation period. The utilisation for the two vessels was 88% in Q2 2011, compared to 23% in Q1 2011. A new 4C OBN contract of approximately two to three weeks duration in the Norwegian Sea for ExxonMobil Exploration and Production Norway AS as the PL596 operator was awarded on 4 August 2011. This is a pilot survey utilising the SeaBird’s NODE technology in sub-basalt structures which are difficult to image with other seismic methods. Management is actively pursuing further work, and see several opportunities coming up for various OBN surveys through 2nd half of 2011 and into 2012 through bids and tenders already submitted.

Utilisation for the 2D/3D vessels was 62% in Q2 2011 (Q1 2011:57%). The utilisation has continued to improve during the first 6 months of 2011 from only three vessels on contract at the beginning of the year to all 2D vessels generating revenues or being committed to contracts at the end of Q2 2011.

Aquila Explorer had 89% utilisation in Q2 2011, and is employed to September/October 2011. Harrier Explorer achieved 99% utilisation in Q2 2011 and continues working under a long term charter to PGS until end September 2011, when the vessel will go into yard for classification work. Northern Explorer had 78% utilisation in Q2 2011, and isin mobilisation/standby mode since 7 August awaiting contract. Hawk Explorer had 56% utilisation in Q2 2011, mainly due to classification in May/June 2011 and will be employed till end of September 2011, however further employment on a longer term 2D contract is in the process of being concluded. For Osprey Explorer, a 50% utilisation has been allocated during her 3 month standby in Q2 2011 while waiting on Mexican authority approval, which was granted early August 2011. The MultiClient provider has accepted this waiting time as cost in relation to profit sharing of MC sales. In addition, the vessel is committed on a 2D survey in South America to end December 2011. The M/V GGS Atlantic joined the SeaBird fleet on 21 May 2011 (not included in statistics above) as part of the frame agreement entered into with Spectrum ASA, and is continuing on her MultiClient work in the Barents Sea until mid October 2011.

2D and 3D contracts have also been awarded to the Geo Mariner in Q2 2011. These contracts will now be transferred to Voyager Explorer following the bare boat chartering of this 2005 built 3D four streamer vessel in early August 2011.

As for the tendering and potential on the 2D and 3D market, SeaBird is satisfied with the increased tender activity and expects several awards going forward with the potential of improved utilisation for this segment.

SeaBird carried out a substantial reconstruction of its debt to strengthen the financial position during Q1 2011 through issuing a USD 42.9 million convertible loan with PGS. Maturity of the NOK 400 million unsecured bond was extended from February 2012 to February 2014. Finally the maturity of the loan, presently USD 39.9 million, with a bank consortium with BN Bank (now Sparebank 1 SMN) as agent was extended by two years to September 2014.

There are no further significant committed investments, except normal maintenance type expenditures and certain equipment upgrades for our present fleet of vessels. The Management and the Board of Directors have also decided to put the previously planned expansion of the Ocean Bottom Node operation through constructing a second OBN vessel on hold until a longer term contractual prospective can be achieved.

SeaBird did not meet covenants under the Loan Agreements with banks as of 30 June 2011. Waivers have been filed and a positive dialogue has started. SeaBird expects a clarification shortly.

Oil prices continue at a good level, but still subject to fluctuations, and forecasts for the future remain high. This will develop into market opportunities for frontier exploration. However SeaBird is still very dependent on the speed that oil companies and National Oil Companies (“NOC’s”) can and will work to in regard to schedules for tenders and awards.

The 2D fleet is continuing under short contract employments, and SeaBird has a good track record on contract utilization. Source vessel requirements are becoming more regular as the Gulf of Mexico opens up end this year and through to 2012.

SeaBird is moving into the 3D four to six streamer market with the entry of the Voyager Explorer, and this already has shown benefits with the vessel fixed to February 2012, and prospects are good for continuing utilization in the Asia-Pacific region.

SeaBird continues to see high interest in SeaBird OBN technology with tenders and quotations requested for high level OBN reservoir monitoring surveys and pilot studies for new areas. The OBN market is still immature, but the four component (4C) data now having reached completion of processing and results seen by oil companies, SeaBird has every expectation of the market maturing through 2012 and beyond. The medium and long term future is linked to the time lapse surveys (4D) for which SeaBird now sees the first tenders being released. SeaBird has now reached five of the six supermajors with this technology, as well as the NOC’s behind some of the geographical survey areas, and SeaBird see very positive responses.

SeaBird is continuing to work together with PGS to develop the areas of co-operation for the rest of 2011 where we also see the beginnings of a demand in Multi-Streamer and OBN surveys and the development of the offers in combination. This will take time to mature and is a plan for PGS for 2012 and beyond. SeaBird will continue to market node only surveys worldwide as usual. 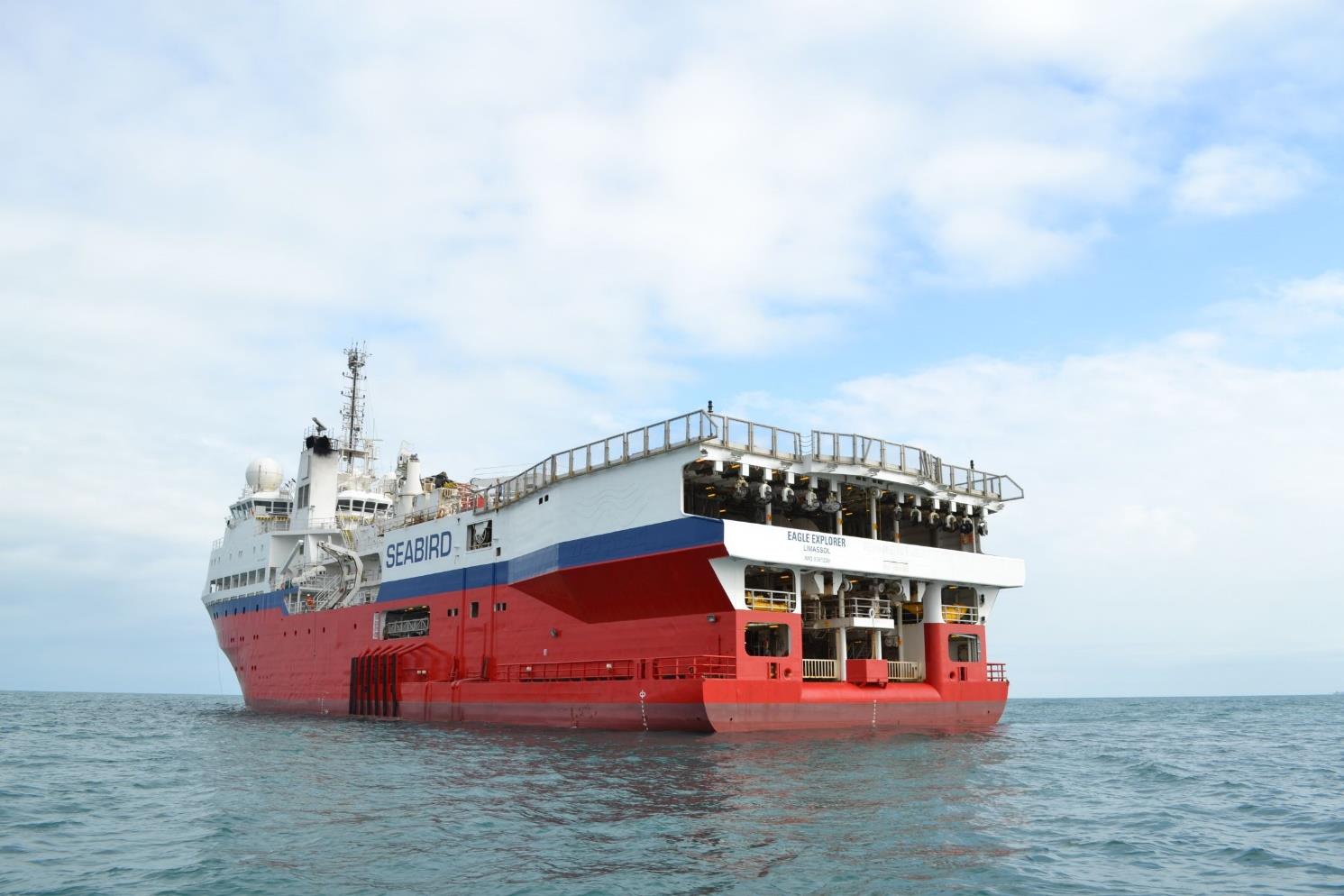