Damen said on Tuesday that the delivery of the new 2710 model FCS was done on 4 September. This was the first delivery of this model in the Netherlands – more precisely Scheveningen.

According to the company, it took less than six months from contract signing to handover of the vessel named Green Waves.

Damen added that the speed of delivery was due to the company’s practice of building standardised vessels in series and for stock, so the hull was already under construction at the firm’s shipyard in Antalya, Turkey.

As for Rederij Groen, it secured a contract to use the vessel to undertake crew transfers for the oil and gas industry in Germany and Denmark.

Rederij Groen already operates ten Damen vessels, including three Damen FCS 2610 vessels. Like its predecessor, the FCS 2710 has the identical Sea Axe hull. According to Damen, the Sea Axe significantly reduces vertical slamming, enabling the vessel to glide through the waves.

A key aspect is the vessel’s one-metre increase in height above the water. This enables the FCS 2710 to operate in waters with over two-metre wave height, considerably raising uptime.

Although the vessel is just one metre longer than the FCS 2610, it can transport twice as many passengers – 26 personnel in its standard configuration.

Vincent de Maat, Damen sales manager, said: “We are very proud of the fact the Rederij Groen has decided to use three Damen crew tender vessels – three FCS 2610 vessels and now the new FCS 2710, for their new project.

“Two of the FCS 2610 vessels – Green Wind and Green Water have been refitted earlier this year at Damen Shipyards Hardinxveld in preparation for their new job”. 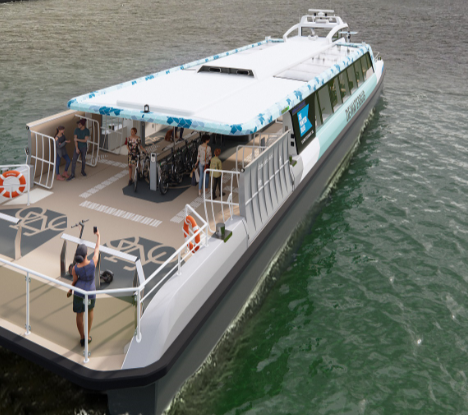