Dutch shipbuilder Damen Shipyards Group has completed sea trials for its first Fast Crew Supplier (FCS) 7011 vessel off the Turkish coast and the vessel is ready to start its journey to the Netherlands.

Damen and Ampelmann have reached an agreement for the commercialisation of the FCS 7011, which will be accomplished by incorporating the walk-to-work expertise of Ampelmann with Damen’s experience in designing and building crew change vessels.

Damen spent five years doing research, market consultation, design, construction and engineering for this vessel. After completing its sea trials, the FCS 7011 is set to begin the passage to the Netherlands. Therefore, the comfort and capabilities of the 74-metre, 40-knot, 122-passenger, crew change vessel will soon be available to the offshore energy market and prospective customers.

The vessel combines the latest Ampelmann walk-to-work system and was developed in consultation with the offshore energy industry and maritime research institutes, which makes it the very latest innovation in marine access thinking. It aims to meet the challenges raised by the fluctuation of oil prices and renewable energy innovations.

The FCS 7011 offers a viable alternative to helicopter transport, since, the company claims it presents a cost-effective crew transportation solution. The vessel has already attracted interest from Damen’s customers in the southern North Sea, the Gulf of Mexico, Brazil and West Africa, as it offers the highest levels of comfort and safety, based on Damen’s report.

It has the ability to transfer much larger numbers of personnel at higher speeds and longer distances, which gives the offshore energy market an opportunity to move away from day-rate structures and instead focus on a pay per journey model along with vessel sharing. In such cases, multiple offshore installations could be served in a single round trip. This would enable substantial savings in both time and operational costs.

Comfort and safety are essential when the journey could take up to 12 hours. Therefore, the design of the FCS 7011 incorporates the Damen Sea Axe bow, including the positioning of the accommodation just aft of amidships, and interceptors fitted within the vessel’s stern. As the vessel moves through the sea, this serves to minimise motion sensations. Damen’s newest vessel features a tailor-made Ampelmann gangway and a VEEM gyrostabiliser, providing it with a range of motion-compensating technologies to optimise the safety of crew transfers.

The Ampelmann gangway system is scheduled to be installed once the vessel arrives in the Netherlands, which will make it ready for fully integrated, proof of concept trials in the North Sea.

Earlier this year, Damen delivered its fast crew supplier (FCS) 1605, named Ricochet, to Allseas for fast crew and personnel transfers to the Pioneering Spirit, which is hailed as the largest construction vessel in the world. 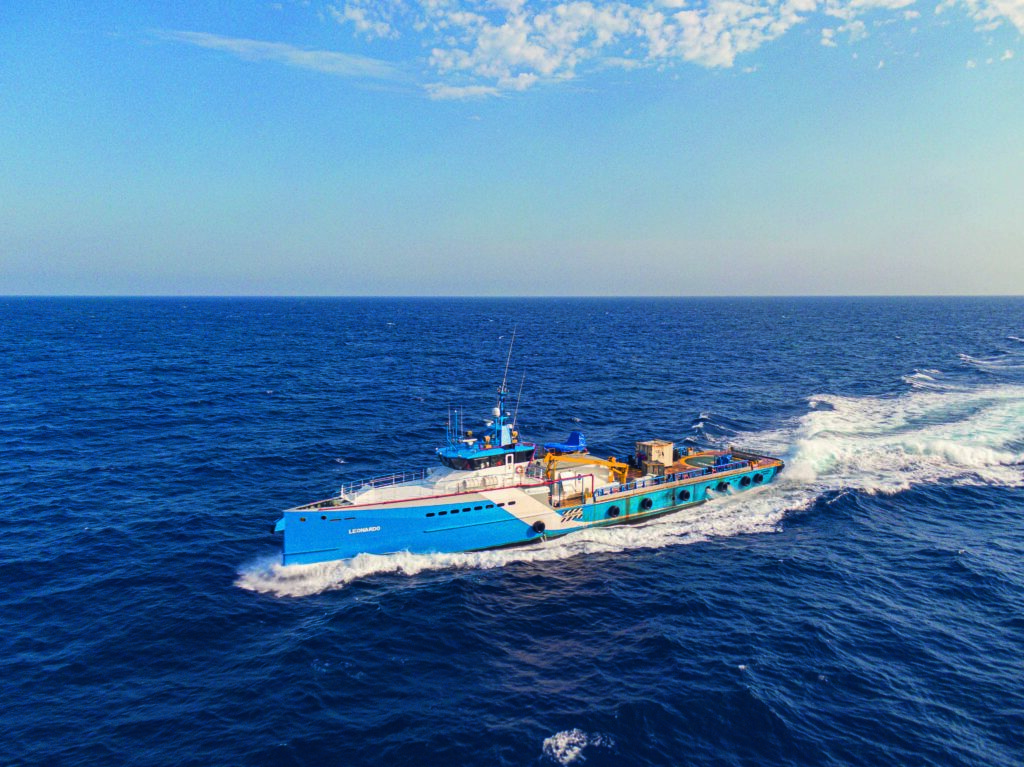 Partner
Damen FCS 5009 m/v Leonardo gets an upgrade that defies the roll of the sea
Posted: 2 months ago
Damen opts for world’s smallest BWTS
Posted: 2 days ago
Damen delivers new RoPax to Timor-Leste
Posted: 26 days ago