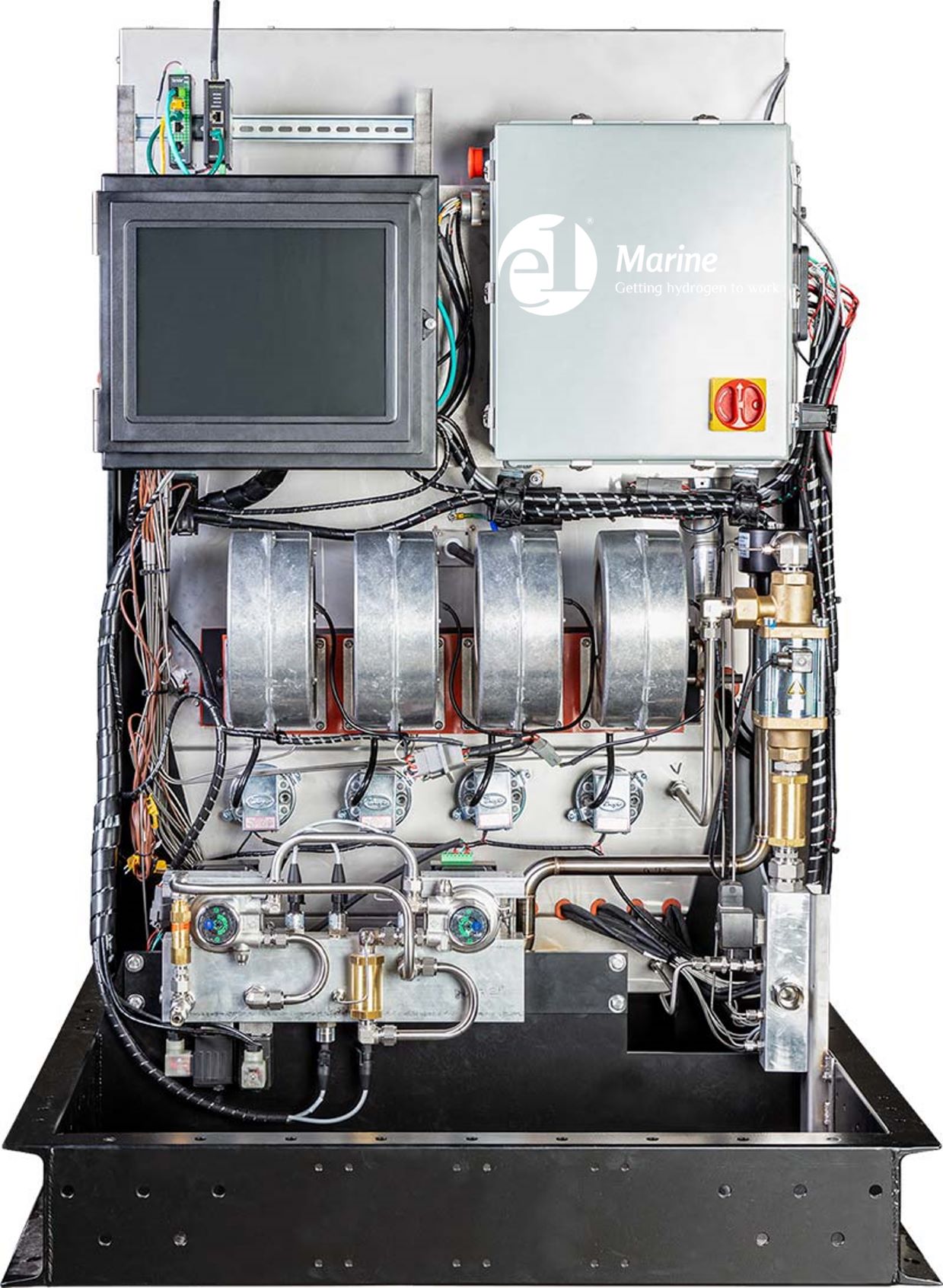 e1 Marine, a global renewable energy company, said that its M-series methanol to hydrogen generator has received Approval in Principle (AiP) for marine applications from the Republic of the Marshall Islands (RMI) Maritime Administrator.

The AiP covers application on any vessel type and comes on the heels of an AiP from Lloyd’s Register in May 2022. e1 Marine said that approval provides further confirmation that the technology has the potential to become an important player in developing and delivering low-carbon energy to international maritime markets.

Through the hydrogen generation technology, fuel cell-grade hydrogen is generated from methanol and water.

The process begins by mixing water with methanol to create the feedstock. The feedstock is pumped into a heat exchanger to cool the product hydrogen, preheat the feedstock, and obtain optimal thermal efficiency for the generator. The pre-heated feedstock then flows into the reactor ‘hot box’, where it is converted into a vapor. It is then directed into a catalytic reactor to convert the feedstock into a syngas, a mixture of hydrogen, carbon monoxide, and carbon dioxide.

The final step is hydrogen purification using e1 Marine’s proprietary membrane purifier, the heart of the system, and a process that separates the hydrogen from the syngas.

“The M-series methanol to hydrogen generator is making hydrogen a viable fuel option for the maritime industry for vastly different applications. The AiP letter from the RMI Maritime Administrator is one step forward in our efforts to work with flag states to support vessel decarbonization. Our technology emits zero NOx, SOx and PM emissions which is helping to meet regulation but also assist with the potential for a carbon tax. This technology delivers a proven efficiency gain over legacy internal combustion engines with a more reliable, safer, and greener fuel than traditional marine bunkers and we look forward to demonstrating this in the near future,” Robert Schluter, Managing Director at e1 Marine, commented.

The system was developed through collaboration between Element 1 Corp, a methanol-to-hydrogen technology company, Ardmore Shipping Corporation, an independent owner and operator of mid-size product and chemical tanker vessels, and Maritime Partners, a tailored leasing solution provider to the maritime industry.

As reported earlier, in March 2021 Ardmore signed a Letter of Intent with Element 1 Corp. and Maritime Partners to establish a joint venture that would deliver E1’s methanol-to-hydrogen technology to the marine sector.

Oregon-based E1 has developed advanced hydrogen generation systems used to power fuel cells with broad use in mobile applications and remote locations. The technology produces hydrogen on demand at the point of consumption.

“Shipowners are under pressure to reduce emissions in line with International Maritime Organization (IMO) measures. For Ardmore, the IMO 2030 and 2050 timelines are targets which we are trying to meet and exceed but this means taking innovative and comprehensive strategies to achieve this,” Gary Noonan, Director of Innovation at Ardmore Shipping, added.

“When combined with PEM fuel cell technology, the e1 Marine Methanol Reformer costs are comparable with a Tier III generator set. However, it also shows more than a 25% relative improvement when comparing energy efficiencies in typical operation. This helps vessels to improve Carbon Intensity Indicator ratings and can be maximized further when using green methanol.”

“It is essential to create the right infrastructure to support sustainable shipping practices and protect marine life and coastal communities. Collaborating on new innovative technologies, like e1Marine’s M-series methanol to hydrogen generator, which will help shipowners explore new options for sustainable shipping, is one way to achieve this goal. Innovative low and zero-carbon energy providers are in a position to transform the shipping industry and we look forward to seeing what progress can be made in the short- and medium-terms,” David Wamsley, Deputy Commissioner of Maritime Affairs of the RMI Maritime Administrator said.

As explained, the fuel-grade hydrogen output meets all relevant ISO standards, and it’s ideal for use with fuel cells to generate electricity or to supplement the standard fuel of a conventional engine. 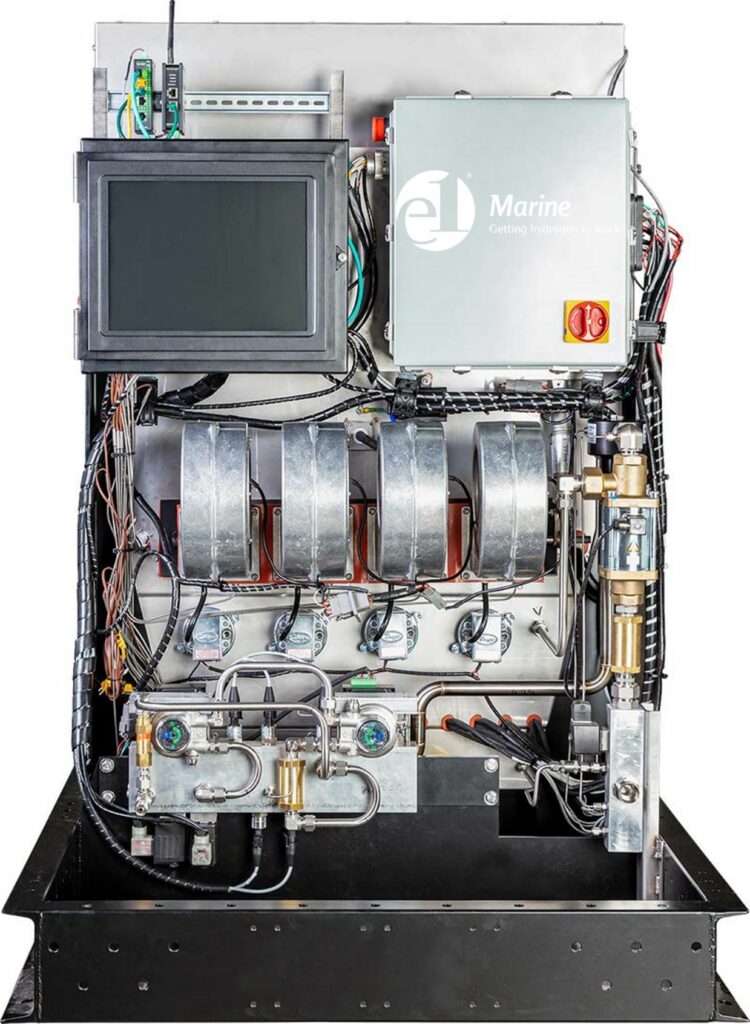 e1 Marine and Green Marine to accelerate methanol-fueled newbuilds in Europe
Posted: about 1 month ago
Premium
MSC looking at LNG and methanol retrofits
Posted: 8 days ago
Methanol to hydrogen generator gets approved for marine use
Posted: 6 months ago