Today, Havyard Ship Technology’s build 120 ‘Polarsyssel’, a Havyard 832 L WE design, was delivered to Fafnir Offshore. It will go straight on assignment for the Governor of Svalbard.

In March 2013, Havyard signed a contract with Icelandic shipping company Fafnir Offshore for the building of a Havyard 832 L WE platform supply vessel (PSV). A month later, Fafnir had secured a long-term contract for the vessel, which will operate six months a year for the Governor of Svalbard for a period of six years.

In the Governor’s service
‘Polarsyssel’ is a Havyard 832 L WE design that, in principle, is equipped as a normal PSV. Havyard Design & Solutions’ WE design has been specially developed with a view to ensuring comfortable, safe and economical operation in demanding weather conditions and in Arctic waters.

When Fafnir Offshore secured the six-year contract with the Governor of Svalbard, the vessel was also modified for this assignment. The modifications included making it an ice class vessel, ICE 1 B, WINTERICED BASIC to avoid icing, and adding a removable helideck, a helicopter fuelling facility and a winch for emergency towing. For six months of the year, the vessel will patrol the waters around Svalbard, Bjørnøya and Hopen and carry out oil spill protection duties, rescue assignments and environmental monitoring.

Revolutionary WE design
While ‘Polarsyssel’ is the first vessel to be delivered with the new WE design, Havyard actually started work on developing this design already in 2010. It has devoted extensive resources to R&D, particularly as regards hull shape and the propulsion system. Designer and hydrodynamics engineer Kristian Voksøy Steinsvik has been particularly involved in research on the hull part of the WE design.

“We have carried out systematic studies in close collaboration with research institutions, which has involved using new methods and tools,’ Steinsvik says. “This has led to both the research institutions and Havyard having to engage in some fresh thinking. The fact that Havyard is receiving research support for several ongoing research projects from the Research Council of Norway through the Skattefunn tax credit scheme, and that several institutions have shown interest in publishing the findings in various journals, confirms that our thinking has been both innovative and correct,” he continues.

“Havyard has invested extensive resources in identifying how details in the basic physics of what happens to the propeller and hull in chaotic weather conditions can affect the overall consumption and emissions picture. Where does the energy disappear to when a vessel is ploughing through waves? How much of this is due to the bow? How much energy goes to manoeuvring? What effect do the propellers and the stern have?”

“Methods that make it possible to separate these properties from each other are worth their weight in gold when we are trying to identify where modifications will really make a difference when the vessel is working under typical operating conditions. Everything has to work together with everything else and “benefits” achieved in one weather situation can easily prove to be “drawbacks” under other conditions. We therefore try to have good systems and processes for putting the theoretical findings into a practical context and balancing all the different properties to arrive at as good a compromise as possible in relation to how the vessel is actually expected to operate.”

‘The most difficult compromise as regards fuel and performance on this vessel has perhaps been in connection with the ice class for the propellers. In order to withstand the loads in ice, the gear housing, the propeller boss and the propeller blade thickness all had to be significantly bigger than is optimal in relation to lower fuel consumption. Despite this, we see that the new design nonetheless scores lower than the values measured during the trial run of previous designs, which does not have ice class propellers. This shows that we have succeeded and that the WE design will improve the competitiveness of the shipping companies that have chosen this design,’ Steinsvik says in conclusion.

Since the assignment for the Governor of Svalbard is only for six months a year, the Havyard 832 WE has also been designed to be a highly efficient PSV for the rest of the year. When the year’s assignment for the Governor of Svalbard is completed, it is a simple task to remove the helideck and other equipment, so that the vessel can offer its services in the PSV market. Its cargo capacity, flexibility and, not least, operating economy mean that the vessel will be very competitive in this market as well.

Jan Helge Solheim, who has been project manager at Havyard’s shipyard in Leirvik in Sogn, says that it has been a challenging, but educational project. “We are specialists at building new types of designs in Leirvik, but this design has thrown up some extra challenges,”the project manager says.

“In addition to the fact that this is first design of the Havyard 832 L WE type, there has also been a lot of extra work involved in modifying the vessel for its assignment for the Governor of Svalbard for six months a year. But delivering advanced technology of good quality is precisely what we are good at. Combined with excellent collaboration with the ship-owners, this has enabled us to successfully complete this project as well. We are certain that ‘Polarsyssel’ will do a good job both for the Governor and for Fafnir when they put it on the PSV market. We are now looking forward to continuing the good collaboration with the shipowners on the next vessel we are already building for them,” concludes a pleased Jan Helge Solheim.

Steingrimur Erlingsson, CEO and founder of Fafnir Offshore, is the first Icelander to have ordered an offshore vessel. Since then, he has also ordered another PSV from Havyard, and his ambition is to build a dynamic offshore shipping company on Iceland. The political establishment on Iceland also strongly believe in this investment, and Dr Össur Skarphedinsson, Iceland’s Foreign Minister, had the following comment when Fafnir ordered its first offshore vessel: ‘I welcome this initiative by Fafnir Offshore and feel sure that the company will benefit from developments in the High North. My prediction is that this will herald a new chapter in Iceland’s industrial history since this is the first vessel to be specially built for assignments on oilfields north of Iceland.’
Exploration has already started on several fields off the coast of Iceland, and Fafnir Offshore will be in an excellent position to offer its services when they are needed. 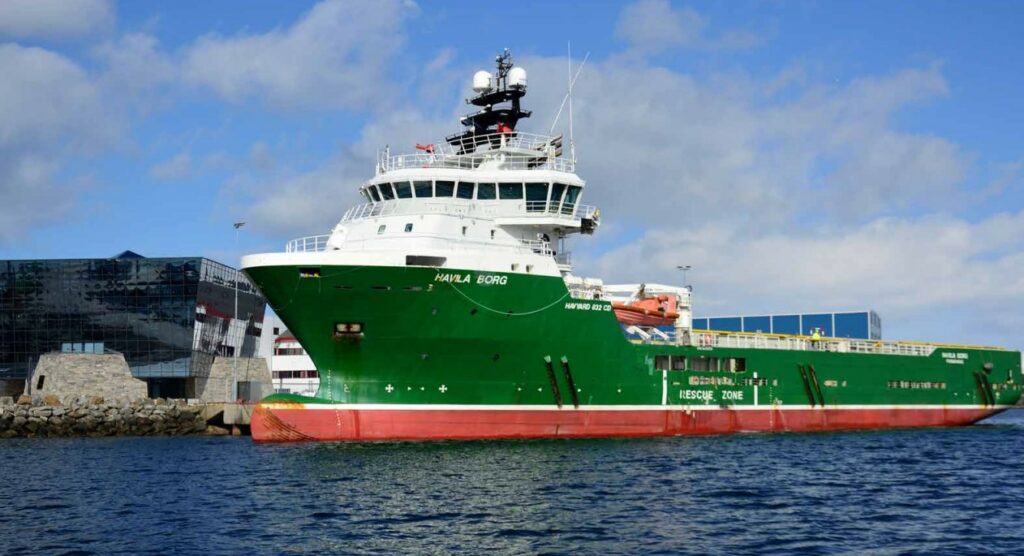