Belgium-based Fluxys and service supplier of liquefied natural gas Titan LNG have teamed up to build the FlexFueler 002, an LNG bunkering pontoon in the Antwerp port.

Titan LNG said on Tuesday that the pontoon would be commissioned by mid-2020 and make liquefied natural gas more widely available as shipping fuel in the Antwerp port and region. The company will be the long-term operator of the pontoon.

The FlexFueler 002 LNG bunkering pontoon will be located at Quay 526/528 in the port of Antwerp. At the quay, Fluxys has a concession to provide LNG bunkering services and currently accommodates truck-to-ship bunkering on the site.

From there, the FlexFueler 002 will provide bunkering services throughout the Antwerp port and region to inland waterway vessels and small coasters.

The FlexFueler 002 is the second Titan LNG-developed pontoon of its sort, identical to the FlexFueler 001, which will come into service in Amsterdam in around three months.

Titan LNG added that the demand for LNG and LNG bunkering infrastructure was increasing as regulations for sulfur content in shipping fuel have become stricter and would tighten even more in 2020.

In this respect, switching to LNG cuts emissions of sulfur and particulate matter to negligible levels while emissions of nitrogen oxides are reduced, and carbon emissions lowered.

Pascal de Buck, CEO of Fluxys, said: “The pontoon is yet another link we are adding to the logistics chain in Belgium to make LNG more widely available as an alternative fuel for ships.”

Niels den Nijs, CEO of Titan LNG, added: “The use of LNG as a marine fuel is rapidly growing. We are convinced that the Titan LNG FlexFuelers are the missing link to safe, economical, and speedy LNG delivery in the ARA region (Amsterdam-Rotterdam-Antwerp). With FlexFueler001 and 002 providing back-up for each other, we can provide the operational certainty that ship owners require.”

It is worth noting that G&V and Rolande LNG, Titan LNG’s sister company, will build and operate an LNG fueling station for heavy-duty trucks next to Quay 526/528.

The infrastructure will also be used by Fluxys and Titan LNG to provide permanent LNG bunkering services for inland waterway vessels in addition to the current truck-to-ship bunkering option. 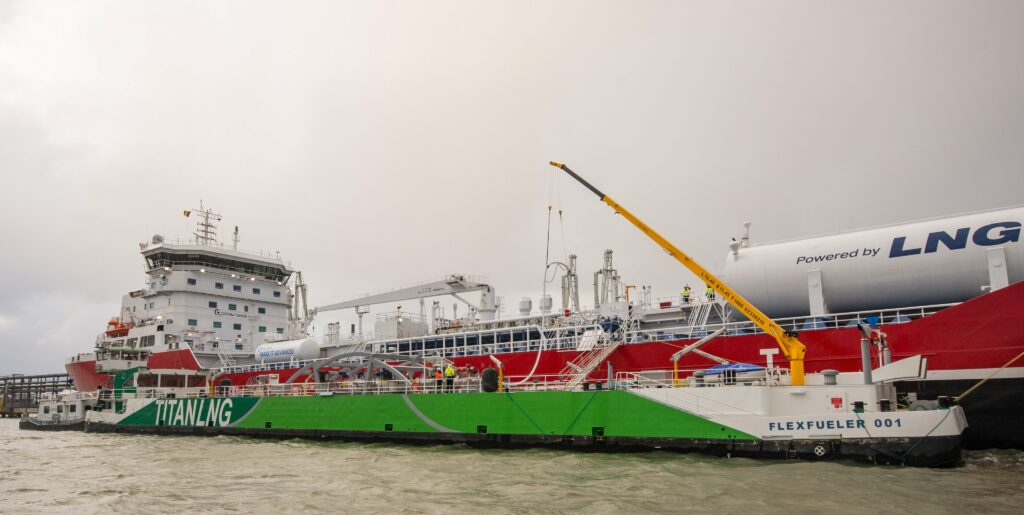