MV Tennor Ocean, a 210-metre-long RoRo newbuild under construction at German shipyard Flensburger Schiffbau-Gesellschaft (FSG), set off on a test voyage from Flensburg heading for Bremerhaven.

The ferry is on the move to Dock 3 at Lloyd Werft. During its week-long stay there, the shipbuilders of FSG will carry out the remaining work on the ship’s hull to optimise the performance data.

Afterwards, MV Tennor Ocean is scheduled to set out on a multi-day test voyage on the North Sea and the Baltic Sea. In a tightly scheduled programme, all technical systems will be checked and nautical manoeuvres will be carried out.

Already during the voyage from Flensburg to Bremerhaven, the 2.11-metre-high folding mast will be tested. It has been newly developed by FSG for this type of ship and enables passage through the Kiel Canal, which connects the Baltic and the North Sea. In this waterway, the mast height of a ship may not exceed 40 metres above the water level.

The ferry is able to accommodate 279 truck trailers on more than 4,000 lane metres spread over four decks. It features the RoRo type 4100 design, developed by FSG, and it has already been built several times by the shipyard. The design is characterised by particularly low fuel consumption compared to the market and an innovative loading concept.

FSG was acquired by Lars Windhorst’s Tennor Group back in 2019 as part of the shipbuilder’s reorganization to ensure the business remains afloat as the yard was facing financial troubles.

The company secured its first order the following year from IVP Ship Invest.

The contract involves the construction of energy-efficient RORO ferry, and includes an option for an additional vessel. As informed, the order has a total value of EUR 140 million (around $167 million).

As the shipbuilding market started to pick up in 2021 owing to the easing of the COVID-19 impact, the company started winning new orders.

Namely, FSG received an order for the construction of a RoRo vessel with LNG propulsion from the Australian shipping company SeaRoad. The first steel for the vessel was cut in May 2022. The order is worth more than €100 million ($107.3 million).

The ferry is scheduled for delivery to SeaRoad in the fourth quarter of 2023. The new RoRo vessel will operate on Bass Strait between Devonport, on the island of Tasmania, and Melbourne, Victoria on mainland Australia.

The shipyard is also working to address the topic of zero-emission, combining both ecological and economic aspects in specialized shipbuilding.

Last year, the shipyard signed a Memorandum of Understanding with Canadian intermodal transportation company Oceanex on the innovative design of a climate-neutral container roll-on/roll-off (ConRo) vessel.

Together, the partners intend to investigate the utilisation of alternative fuels, such as ammonia, methanol, synthetic and biofuels as well as hydrogen, and the technologies based on them with regard to the Oceanex operational area. 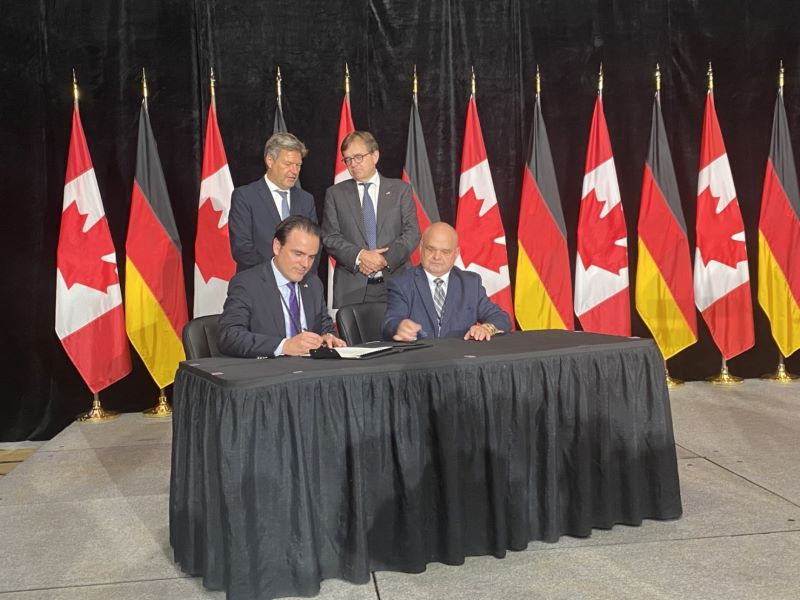