South Korean shipbuilder Hyundai Heavy Industries (HHI) has won design approval from the Korean Register of Shipping (KR) for its ‘Hi-Rotor’, an independently developed model of a rotor sail.

The approval is the first of its kind in the country’s shipbuilding industry as the sector moves toward developing green technological solutions to decarbonize shipping.

Wind-assisted propulsion systems are gaining in popularity as a tool for reducing a ship’s fuel consumption and its carbon emissions.

By harnessing wind energy using the Magnus effect vessels fitted with the cylindrical structure on board can save between 6 and 8 percent in fuel consumption.

The design approval comes on the back of an approval in principle the company got in December 2020.

HHI’s Hi-Rotor uses a reduction gear method in relation to the driving part connecting the electric motor and the rotor thus increasing the stability of the drive system compared to the belt method of existing commercial products.

HHI plans to start the demonstration process of the system on land in the second half of this year. The shipbuilder said it would move to seek product orders based on the design approval.

Prior to developing its own in-house design, Hyundai has been working with Norsepower on different vessel designs featuring rotor sail technology.

In 2019, HHI won an approval from Lloyd’s Register for an eco tanker VLCC that would run on LNG fuel, use rotor sails to reduce consumption, and feature a volatile organic compounds (VOC) system to increase efficiency.

South Korean shipbuilders are faced with fierce competition from their Chinese counterparts as both sides are looking to develop in-house green and smart technologies to attract more orders from shipowners.

Named the Jiangnan Smart Sail, the technology behind the system is based on a high-performance computing platform that evaluates the aerodynamic characteristics of sails and selects airfoil parameters.

The system is autonomous and remotely controllable, and it can save up to 4% of energy for ships, according to its developer. 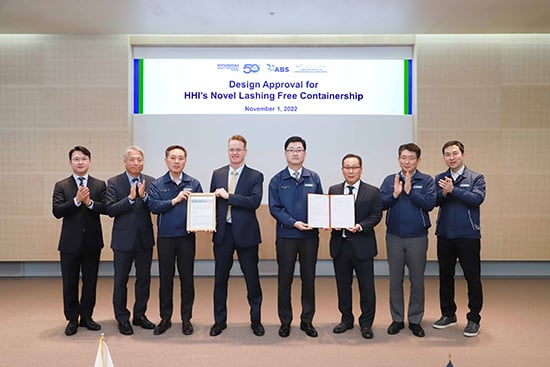