The JV, HMM-PSA Singapore Terminal, will be launched this year, however, the exact date has not been fixed yet, a spokesperson for HMM told Offshore Energy – Green Marine.

With this move, HMM will secure its container terminal in Singapore, the busiest transshipment port.

Specifically, PSA will control a 58 per cent stake in the joint venture, while HMM will own the remaining 42 per cent.

Besides volume and terminal capacity assurance, PSA and HMM will also collaborate in operational technology developments and innovations.

“We are honoured to join forces with HMM, one of the world’s top ocean carriers and a globally integrated logistics company, to maximise operational synergies and address the rapidly changing landscape of the shipping industry. PSA and HMM have had a steadfast and longstanding working relationship and we are excited to take this partnership to the next level, achieving a strategic win-win for both parties,” Ong Kim Pong, Regional CEO Southeast Asia, PSA International, commented.

“Both HMM and PSA have extended their reach to every corner of the globe and have maintained a strong partnership based on mutual respect. We believe this joint venture terminal in Singapore plays a significant role as a springboard for both parties to move forward to a new phase. In addition, HMM looks forward to creating greater synergy for our 24,000 TEU vessels by securing berth on arrival and providing more reliable services for our customers through the joint venture,” Jae-hoon Bae, President & CEO of HMM, said.

Last week, HMM said it signed a sales and purchase deal with CMA CGM for the sale of its 50 per cent stake minus one share in Total Terminals International Algeciras (TTI Algeciras), a container terminal in the south of Spain. As explained, HMM hopes to achieve greater synergy effects based on strategic cooperation with CMA CGM.

Note: The article has been amended since initial publishing with a joint statement issued by HMM and PSA on 3 September. 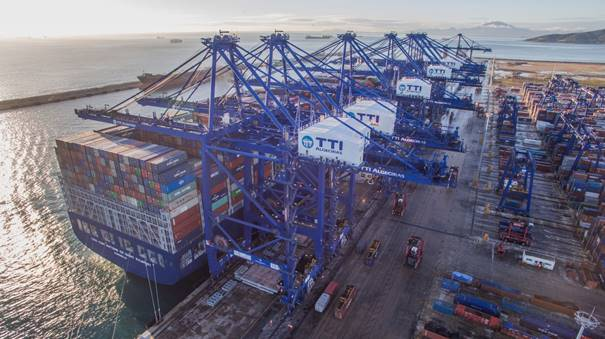