The company, a joint venture between NorthStar Midstream and Pivotal LNG, said that the refueling operation marked the vessel’s first LNG bunkering in the United States.

The barge has a capacity of 5,500 cubic metres and operates as an articulated tug-barge unit (ATB) along the coast of the southeastern U.S.

It is owned by Polaris New Energy, a subsidiary of Seaside LNG Holding, which took delivery of the vessel on 3 December 2021.

“We are honoured to have earned the trust and confidence to fuel Sakura Leader and to demonstrate our unique ability to serve NYK LINE,” said Roger Williams, Manager of JAX LNG and VP of Commercial LNG and Gas Development at BHE GT&S, the parent company of Pivotal LNG.

“We are grateful for the partnerships we’ve built with NYK LINE and JAX LNG and are honored to serve as the port of choice for this clean energy milestone,” said JAXPORT’s Director of Automotive Accounts Alberto Cabrera, who presented the ship’s captain with a maiden voyage plaque.

“Our on-dock and near-dock LNG fueling capabilities support the evolving needs of our customers as they work to make their supply chains more eco-friendly.”

Sakura Leader is the first large LNG-fueled pure car and truck carrier (PCTC) built in Japan. The vessel, featuring a length of 200 metres and a width of 35.8 metres, was built at the Shin Kurushima Dockyard of Shin Kurushima Toyohashi Shipbuilding Co. The 7,000 CEU newbuilding was delivered to NYK in 2020. 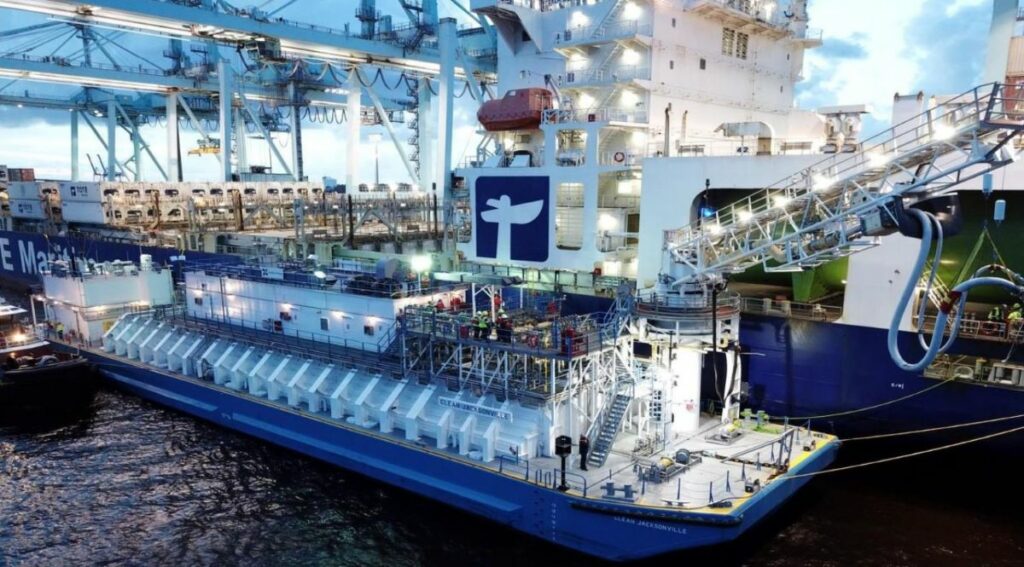