Japanese Kawasaki Heavy Industries has decided to withdraw from its offshore construction side of business in an attempt to restructure amid an unstable oil price environment.

According to its statement last Friday, the company has experienced a slump in the ship & offshore structure segment in the past few years and recorded large losses in the past two years.

For this reason, a restructuring committee headed by the company’s president was established in October 2016 for the purpose of a fundamental revision of the business structure of ship & offshore structure segment.

As a result of the consideration, the board of directors decided at a meeting held on Friday, March 31 to implement the restructuring.

One of the company’s fundamental strategies includes withdrawal from the offshore structure sector with the construction of the offshore service vessel for Norway, which is currently in progress, as its final construction. To remind, the Japanese company is building a combined well intervention and tophole drilling vessel, the Island navigator, for the Norwegian shipowner Island Offshore.

The company considered a number of options including  corporate spin-offs and alliances. However, based on the assumption that the severe shipbuilding market will continue, the company decided that the the most rational option to increase enterprise value is to reduce construction in Japan by moving its merchant ship construction to China.

Kawasaki believes that there is still no resolution of the excessive construction capacity in sight and that the growth in the demand for LNG and LPG and the strengthening of environmental regulations is a good opportunity for the company.

Further, Kawasaki will reduce invested capital through the reduction of inventories and fixed assets as the scale of the domestic business is reduced by approximately 30%, in addition to concentrating domestic merchant ship construction in Sakaide Works.

With this plan, the company is aiming for an 8% return on invested capital for FY2020. Kawasaki also said that the full capacity of the entire company will be used to complete the ships already ordered. 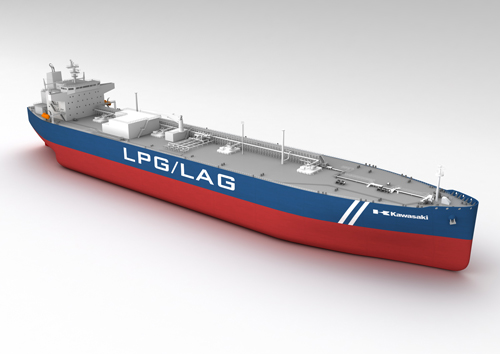