Maersk Line, Limited (MLL) and its guests celebrated the naming of its fourth U.S. flag tanker, the MAERSK PEARY, last Friday at the Half Moone Cruise and Celebration Center in Norfolk. The freshly painted, 591-foot ship sat pier-side in downtown Norfolk and was adorned with red, white and blue bunting as distinguished guests, customers, partners, and colleagues welcomed the vessel into MLL’s U.S. flag fleet.

The vessel is ice-classed and is aptly named after Rear Admiral Robert E. Peary, famous for his excursions to the North Pole. This extraordinary vessel will travel annually to Thule Air Force Base, Greenland and McMurdo Station, Antarctica delivering fuel to support military operations and research at the top and bottom of the globe. In July, MLL won a long-term time charter from the U.S. Navy’s Military Sealift Command to support these missions. MAERSK PEARY was reflagged into the U.S. registry on September 19, 2011, and American officers and crew will operate the ship.

“The name-giving is a great opportunity to honor our customers and partners; reflect on our company’s commitment to the U.S. flag maritime industry; and celebrate the strengthening of these partnerships,” said John F. Reinhart, President and CEO of Maersk Line, Limited, at the ceremony. “We are fortunate that many of our esteemed guests, colleagues, and Admiral Peary’s descendants have joined us to celebrate our new tanker.”

“We chose the name Admiral Peary because he was a Navy man, he was an explorer and he was somebody to be reckoned with,” said Mr. Reinhart. “By naming the ice-class tanker after Admiral Peary, we uphold his legacy as a model of courage, determination and integrity.“

Mrs. Mary Reinhart, the vessel’s godmother and wife of John Reinhart, blessed the ship and broke a bottle of champagne against the ship’s hull in the time-honored fashion to bring good fortune to the ship and crew. “Norfolk is the home port of the MAERSK PEARY, and it is proudly displayed on her stern,” said Mrs. Reinhart. “In a sense, when this vessel departs, it will connect all of us here in Norfolk with parts of the world rarely seen or visited, except by courageous explorers like Admiral Peary.“

Secretary of Transportation for the Commonwealth of Virginia Sean Connaughton recognized the symbolic importance of the ship’s name. “Vessel name-givings are about a name that the ship carries from port-to-port worldwide,” said Secretary Connaughton. “Maersk is one of the greatest names in the maritime industry. Peary symbolizes the courage of the explorer.”

Kevin M. Tokarski, Associate Administrator for National Security at the U.S. Maritime Administration, spoke at the ceremony about the vital role that companies like Maersk Line, Limited have in maintaining our national security. “The addition of the MAERSK PEARY is another example of excellence Maersk Line, Limited provides to the U.S. flag fleet,” said Mr. Tokarski. “MAERSK PEARY will add 45 jobs and expand the pool of ready and capable U.S. Merchant Mariners.”

Mr. Michael Sacco, President of the Seafarers International Union (SIU), praised Maersk Line, Limited under John Reinhart’s leadership for its continued investment in U.S. flag vessels and the U.S. Merchant Marine. “When the U.S. Military looks at such a ship, it sees capacity to sustain its forces around the world. When members of SIU see this beautiful ship, they see jobs and opportunity,” said Mr. Sacco. “It’s about my three favorite words – jobs, jobs, jobs!”

Stephen M. Carmel, Senior Vice President of Maritime Services at MLL, acknowledged the significance of adding an ice-class tanker to MLL’s fleet. “We have ships working all over the world but this will be the first time we have the opportunity to add polar operations, Greenland in the Arctic and McMurdo in the Antarctic, to our company’s resume,” said Carmel, a tanker captain of unlimited tonnage on all oceans. “It is truly exciting that the MAERSK PEARY will allow MLL to join that somewhat exclusive club of polar operators and we are looking forward to that work.”

MAERSK PEARY embarked on its maiden voyage under the U.S. flag early Saturday morning, and she is expected to arrive at McMurdo Station in January 2012 and then Thule Air Force Base next summer.

Maersk Line, Limited (MLL) is an American company, headquartered in Norfolk, Va., that provides U.S. flag transportation, ship management and maritime technical services to government and commercial customers. As a business within the A.P. Moller – Maersk Group, MLL uniquely combines unparalleled experience, maritime expertise and global intermodal capability. In 1983, MLL won its first government contract to convert and operate five military prepositioning ships. Since then, we have managed and operated more than 90 vessels of varying types and sizes. With the largest U.S. flag fleet in commercial service, we employ approximately 900 U.S. mariners daily and work with all the major U.S. maritime unions. 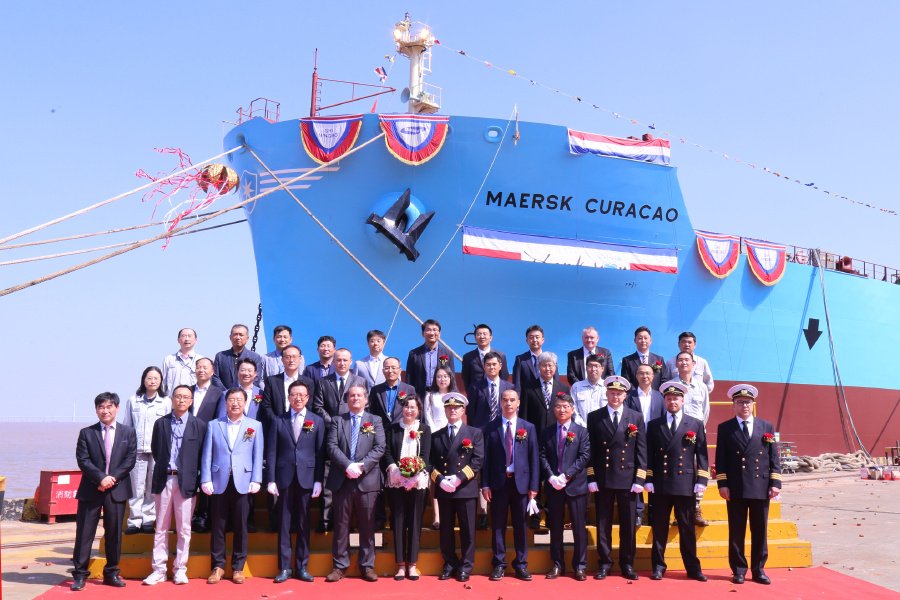