Photo: The Atir tidal turbine being towed from Vigo to Orkney. Photo provided by Magallanes Renovables.

Magallanes’ floating tidal turbine on its way to Orkney

Magallanes Renovables’ floating tidal turbine is currently being towed from Spain to Scotland, where it will arrive mid-September and embark on a new journey: demonstrating its operational performance at a grid-connected tidal test site.

The company will install its full-scale Atir tidal turbine at the European Marine Energy Centre’s (EMEC’s) Fall of Warness site as part of the OCEAN_2G project that aims to test, validate and pre-certify Magallanes’ second generation (2G) 2MW tidal platform.

Prior to deployment at EMEC, Spanish tidal energy developer has been validating its Atir prototype in controlled marine environment at the Vigo bay in Spain, under a structured test program which has seen power being generated via tow tests.

As the tests in Vigo are now completed, the company said it had validated and optimsed the full-scale tidal turbine after carrying out more than 20 control, power, safety and energy test in seven towing operations with a local tug vessel, which simulated the current. The tests allowed for achieving an output of 450kW, with limitations due to the power of the tug vessel itself.

(The article continues below the image.)

Magallanes Renovables now aims to incrementally build up Atir’s output capacity to 2MW and, by installing the floating turbine at EMEC, to ready the device for the market.

The 45-metre Atir was built and launched in Vigo, and features a 25-metre draft which supports two 19-metre diameter rotors. The platform has been designed to be anchored to the seabed by mooring lines at the bow and stern, while the yellow and red steel-built tidal platform floats on the surface. 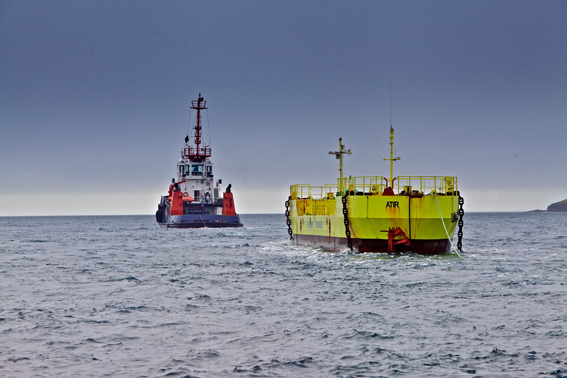