The Netherlands is looking into whether areas of the North Sea could be used simultaneously for offshore wind and carbon capture and storage (CCS) developments.

According to a study performed by Fugro, offshore wind farms and CCS projects in the Dutch sector of the North Sea can coexist; however, safety of such future developments needs to be ensured.

To ensure safe co-location, the company provided the Dutch government with several key recommendations, including developing a (3D) characterisation model for geological sites that can be used to determine the probability of an earthquake occurring directly below a wind farm.

Fugro also said CO2 liquid injection needed to be monitored to understand the effects on the pressure of the earth.

One of the key systems that need to be installed is that for seismic monitoring to track the actual seismicity at the site. In combination with this, a traffic light system for seismic risk management should be implemented, with which activities can be stopped on time, according to the company.

Fugro was commissioned by the country’s Ministry of Economic Affairs and Climate Policy to assess this kind of project co-location to inform regulatory decisions and guide future overlapping of CCS and offshore wind developments.

This comes shortly after the Netherlands, which has two CCS projects planned for its North Sea waters, doubled its 2030 offshore wind target and, together with three other EU member states, pledged to have massive offshore wind capacity in 2050.

With the new areas, located to the north and northwest of the Netherlands, the country has doubled the total planned capacity for offshore wind energy to around 21 GW by 2030.

By the same time, two CCS projects are planned to be built in its North Sea waters: Porthos and Aramis.

Porthos (Port of Rotterdam CO2 Transport Hub and Offshore Storage) – a joint venture between Energie Beheer Nederland (EBN), Gasunie, and the Port of Rotterdam Authority – involves storing 2.5 million tonnes of CO2 from the industry under the seabed at a depleted gas field located some 20 kilometres off the coast, starting in 2024.

In December 2021, Air Liquide, Air Products, ExxonMobil and Shell signed the final contracts for the transport and storage of CO2 with the Porthos joint venture.

Pending government permit approvals, a final investment decision for the project is expected to be taken this year, with the construction of the Porthos system to take about two years. During this period, the four companies that signed the contracts will construct their capture installations, and the first CO2 can then be stored in 2024.

Partners behind Aramis, the second CCS project in the Netherlands, plan to take a final investment decision by 2023 with an operational start-up in 2026, and aim at a synergistic relationship with the Porthos project.

Aramis, announced in July 2021 as a joint project of TotalEnergies, Shell Netherlands, EBN, and Gasunie, involves developing new CO2 transport infrastructure to enable offshore CO2 storage and is based on an ‘open access’ philosophy to give industrial customers and offshore storage providers the possibility to connect to the infrastructure at a later stage.

The Aramis facilities will include, amongst others, an onshore CO2 collection hub that is located at the Maasvlakte in the Port of Rotterdam, to which the CO₂ from potential customers can be transported via ships as well as through onshore pipelines.

The onshore CO₂ collection hub will consist of a compressor station and a shipping terminal with temporary storage facilities for the liquid CO2 arriving by ship. An offshore pipeline will transport the CO₂ from the collection hub to the offshore platforms, where the CO2 will be injected into depleted offshore gas fields 3-4 kilometres below the seabed. 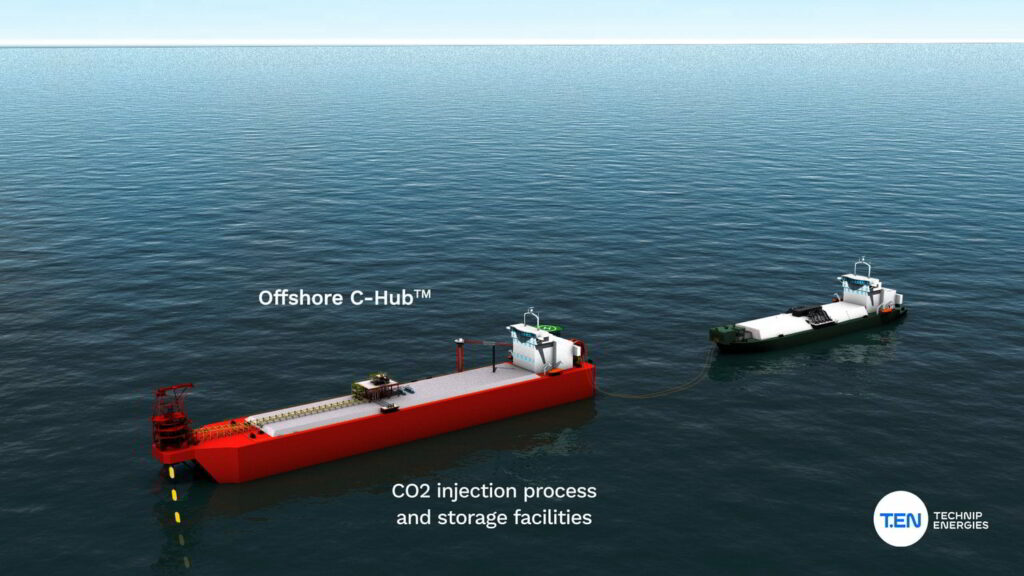