Norway’s H2Carrier and Statkraft have entered into a Memorandum of Understanding regarding a study for the possible use of H2Carrier’s green ammonia floating production vessel, the P2XFloater™, on certain offshore wind locations.

The P2XFloater™ will utilize renewable power to produce green hydrogen and green ammonia which in turn can be shipped to the international markets, the companies said.

H2Carrier recently received an Approval in Principle (AiP) from DNV for the use of the P2XFloater™ for near-shore production.

The purpose of this new study is to evaluate the use of the P2XFloater™ in a true offshore environment.

The P2XFloater™ is expected to contribute to improving the power flexibility of an offshore wind installation and make an offshore wind farm less dependent on grid and export cable facilities.

The study will assess the challenges of operating electrolyzers and an ammonia production process offshore with variable load handling.

”Market demand for green ammonia is rapidly increasing due to the decarbonisation of the industrial and maritime sectors. The P2XFloater™ concept provide a low-cost, fast-track and flexible solution to produce green ammonia on an industrial scale and at a competitive price,” said Mårten Lunde, CEO of H2Carrier AS.

H2Carrier will conduct the study together with the Norwegian engineering company KANFA who, together with its parent company, Technip Energies, has experience in the offshore production and installation industry.

”We are very pleased to cooperate with Statkraft and KANFA to assess the impact of operating our P2XFloater in a true offshore environment. While we so far have focused on near shore operations, we are convinced that the P2XFloater will play an important role in the commercialisation of offshore wind resources,” Lunde said.

HThe P2XFloater concept is based on the conversion of an existing very large gas carrier (VLGC) into a floating, production, storage and offloading (FPSO) unit that can serve to produce environmentally friendly ammonia for the local or the world market.

TheFPSO would source electricity from a wind farm to provide power for electrolysis of seawater to produce hydrogen as input to the so-called Haber-Bosch process which produces liquid ammonia by combining hydrogen and nitrogen under high pressure and high temperature. The required nitrogen would also be produced onboard the FPSO. 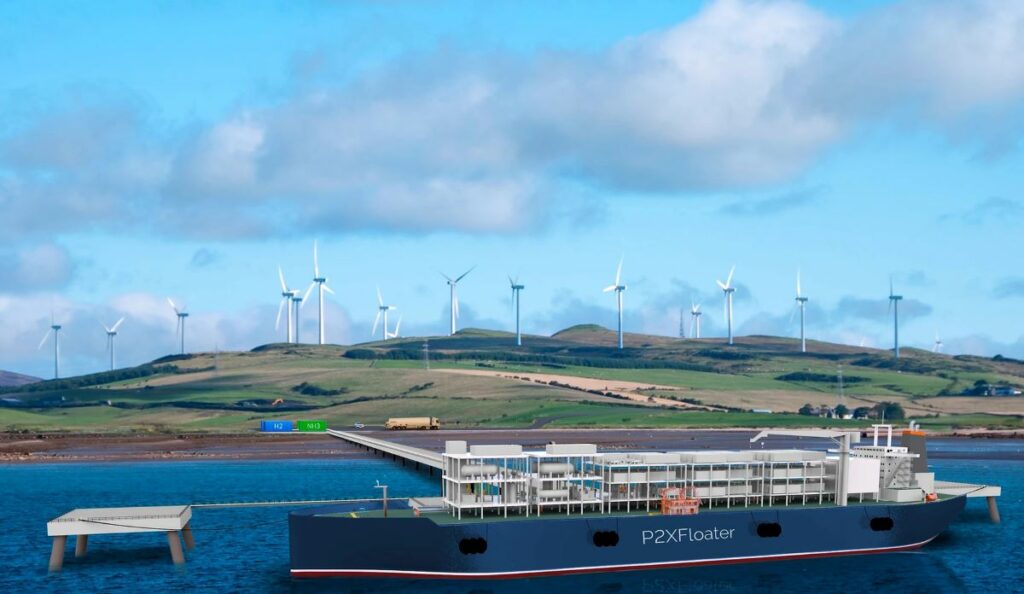