Norwegian shipowner Egil Ulvan Rederi has won a contract to develop, build and operate a zero-emission self-unloading bulker, set to be powered by hydrogen and wind.

The contract award from cargo owners HeidelbergCement Norway and Felleskjøpet AGRI is being revealed after an intense tender process with 31 ship owners competing in a six-month-long process.

HeidelbergCement and Felleskjøpet aim to establish a sustainable transport system without emissions of greenhouse gases where zero-emission vessels play a central role.

As informed, the transport system will combine the cargoes of the two companies, carrying aggregates from western to eastern Norway and grain in the opposite direction.

It is planned to fully develop and optimize the ship concept during 2021, aiming at ordering the vessel by the end of the year.

The zero-emission ship is scheduled to enter operation in early 2024.

Egil Ulvan Rederi and Norwegian Ship Design have jointly presented technical solutions with a focus on energy efficiency and reduced fuel costs, in several meetings with the cargo owners and experts from DNV.

The two companies believe that direct use of nature’s own forces will be an important part of reducing the shipping industry’s carbon footprint.

The ship concept has the project name “With Orca” – Powered by Nature. The vessel will feature two large rotor sails running on wind.

As explained, the vessel’s sailing route will mostly be in open waters in the North Sea, where wind conditions are good for wind assisted propulsion.

To counter drifting, the zero-emission vessel will be equipped with a specially developed keel. The bulker will be fitted with a hydrogen-fuelled combustion engine with hydrogen set to be stored onboard the ship-

The family-owned Egil Ulvan Rederi, based in Trondheim, Norway, operates five general cargo carriers along the coast of Norway and in the North and Baltic seas, as well as two LNG fuelled bulk vessels delivering fish feed to fish farms in Norway.

The company has a ship under construction at Tersan Shipyard in Turkey. The company also partly owns and manages a fleet of self-unloading bulk carriers through Halten AS. 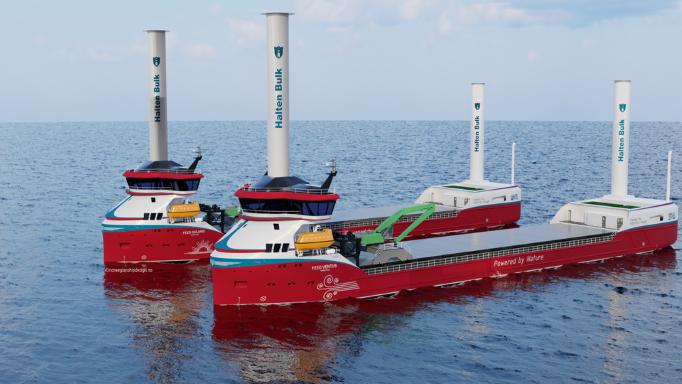