The National Renewable Energy Laboratory (NREL) researchers are exploring ways to significantly advance the wave energy sector by developing concepts in which many small energy converters can be aggregated to create a single structure.

Namely, one of the most innovative elements of DEEC-Tec is its ability to create flexible ocean wave energy converters (WECs), sometimes known as flexWECs.

These devices have inherently broad-banded ocean wave energy absorption and conversion characteristics, meaning they can harvest energy across a wide range of ocean wave heights and frequencies, according to NREL.

To date, WEC designs have been generally centered on large, rigid bodies that float in the water and move relative to each other as waves roll past. These bodies typically absorb ocean wave energy and focus that energy into a centralized conversion mechanism, such as a rotary generator or hydraulic piston.

DEEC-Tec concepts, however, are assembled from many small energy converters that, together, form a structure that can undulate like a snake, stretch and bend like a sheet of fabric, or expand and contract like a balloon

As the overall structure bends, twists, and/or changes shape as the ocean waves roll past, each embedded energy converter can turn a portion of that ocean wave energy into electricity.

Blake Boren, NREL researcher, said: “Our goal with DEEC-Tec is to vastly broaden how we currently conceptualize and envision the use of ocean wave energy. There is a tremendous range of possibilities for how we can develop these DEEC-Tec-based wave energy converters, and we are accelerating that exploration process”.

According to NREL, flexWEC has several advantages including broader spectrum of energy capture, greater resilience, easier installation, reduced maintenance schedules, and near-continuous structural control, among others.

DEEC-Tec is said to provide a new scope of possibilities for how ocean wave energy can be harvested and converted and how flexWEC designs could power a variety of end uses both on land (powering homes and businesses) and at sea (powering navigation buoys and marine vehicles).

Some of these uses will support DOE’s Powering the Blue Economy initiative, which aims to advance marine renewable energy technologies, such as navigation buoys or autonomous underwater vehicles, to promote economic growth in industries such as aquaculture.

While there are many advantages to using DEEC-Tec in the research and development of ocean wave energy converters, there are still unknowns that need to be understood and addressed.

To this end, NREL researchers are identifying the materials, structural designs, electronic systems, and manufacturing methods that could advance DEEC-Tec concepts for marine renewable energy.

As part of this research, NREL is collaborating with outside institutions, such as the University of Colorado-Boulder, Dutch-based energy company SBM Offshore, the U.S. Naval Research Laboratory, and Sandia National Laboratories. 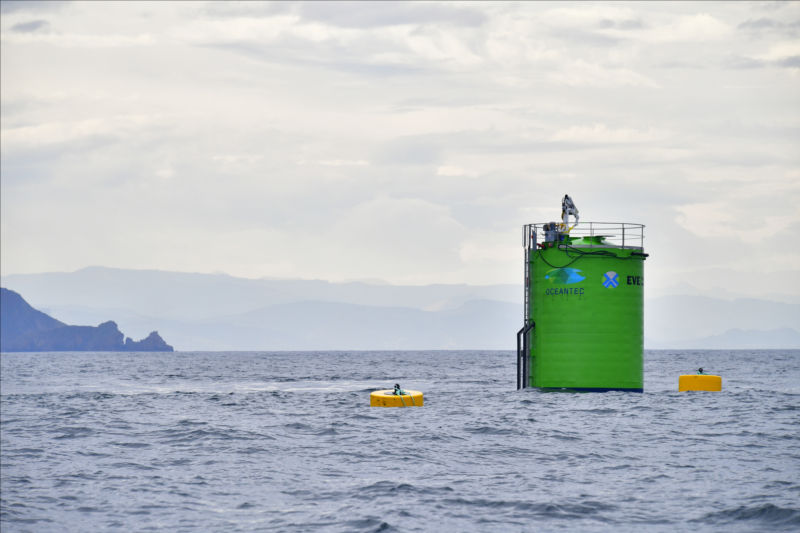