The Singapore-flagged vessel was built at the South Korean shipyard Hyundai Mipo Dockyard (HMD) and handed over to its owner on 19 April 2022.

The 30,873 GT, 50,000 dwt Grouse Sun has been equipped with a dual-fuel engine that can use not only heavy fuel oil but also methanol.

Furthermore, when navigating using methanol as fuel, the vessel has a new technology that suppresses the production of NOx (nitrogen oxides) by adding water to methanol to lower its temperature during combustion. As a result, the vessel can comply with the IMO’s stringent Tier III NOx emission standard and contribute to environment-friendly transportation without the need for an exhaust gas recirculation (EGR) system and a selective catalytic reduction (SCR) device.

Under the management of NYK Shipmanagement, the vessel will be engaged in a long-term charter contract with Canada-based Waterfront Shipping Limited, a subsidiary of Methanex Corporation, the world’s largest methanol producer.

Back in 2020, NYK Bulkship (Asia) entered into a long-term contract with Waterfront Shipping for two new methanol-powered chemical carriers, after the first such vessel was delivered in 2019.

The agreement is part of the eight-ship order placed by Waterfront. Apart from NYK, the order has been carried out in partnership with Marinvest/Skagerack Invest (Marinvest), Meiji Shipping, KSS Line and Mitsui O.S.K. Lines (MOL).

In January this year, NYK Bulkship (Asia) received Seymour Sun, the second vessel from the batch. 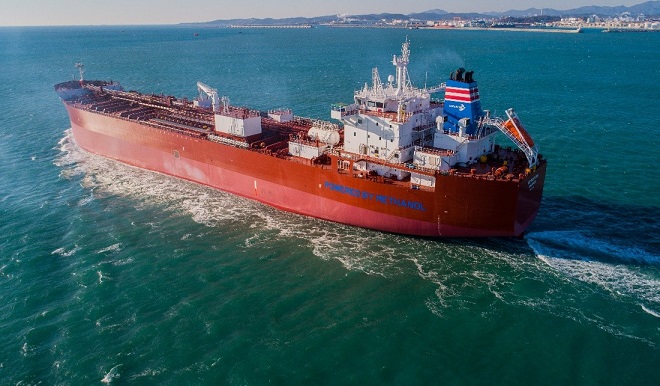