Following the completion of the construction works, Ocean Energy’s 500kW wave energy device, designed around the oscillating water column principle, will be transferred to US Navy’s Kaneohe Bay Wave Energy Test Site (WETS) for a round of grid-connected sea trials.

The one-year testing campaign is scheduled to begin in May 2018, according to Tony Lewis, Ocean Energy’s Chief Technical Officer.

The project has been jointly financed by the US Department of Energy and the Irish government.

After the trials in Hawaii, Ocean Energy plans to transport the device to the European Marine Energy Centre (EMEC) in Scotland for another year of testing – expected to begin in fall 2019, Tony Lewis confirmed.

“The Irish government has been happy enough to support this project with a long-term view that Ocean Energy will come back and produce machines in Ireland. The problem in the country is that we don’t have anywhere to test a grid-connected device at the next scale,” said Lewis.

Lewis also added the US Department of Energy has funded a follow-on project for a 1MW device, together with the Irish government.

He said that during up-scaling to 1MW, the internal machinery of the device will change, but the hull and steel frame will remain the same size as those for 500kW device.

“The idea is to strengthen the device, which is one of the reasons the project has been slightly delayed, so it can withstand a bigger wave climate. At such wave climates, the same sized device can produce 1MW of energy,” said Lewis.

Lewis also said that Ocean Energy hopes to be in position to compete for the ESB International’s West Wave project – a proposed 5MW development in Killard, off the coast of County Clare in Ireland.

To remind, the quarter-scale version of Ocean Energy’s wave energy device has already been tested in Galway Bay, off Ireland. 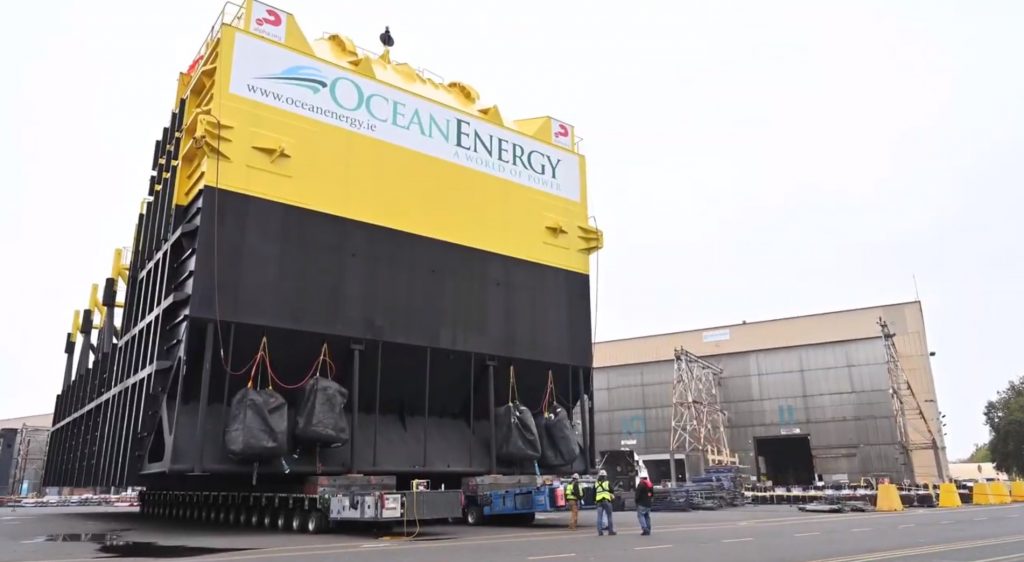