ONE Containership Clashes with Tanker in Piraeus Port

The ultra large container vessel (ULCV) ONE Blue Jay took part in a collision off the Greek port of Piraeus on September 26.

Ocean Network Express (ONE) confirmed that its chartered boxship “came into contact with a chemical tanker in the vicinity of Port of Perama, Piraeus, Greece, at around 1409 hours local time.”

While entering the port, the 14,000 TEU vessel crashed into the starboard side of the 6,285 dwt tanker Gunece, which was berthed at the time. According to media reports, the tanker suffered major damages while two of the 13 crew aboard the unit were injured.

ONE noted that the 23 crew members of the 2016-built ONE Blue Jay were safe, adding that there were no reports of pollution from the vessel.

ONE Blue Jay is currently berthed at the Port of Permana while investigations are ongoing, the operator said. AIS data provided by Marine Traffic shows that the tanker is also still moored in Piraeus.

The port authority reportedly sent a number of tugs to assist the Turkish-flagged tanker, which tilted heavily after the collision. 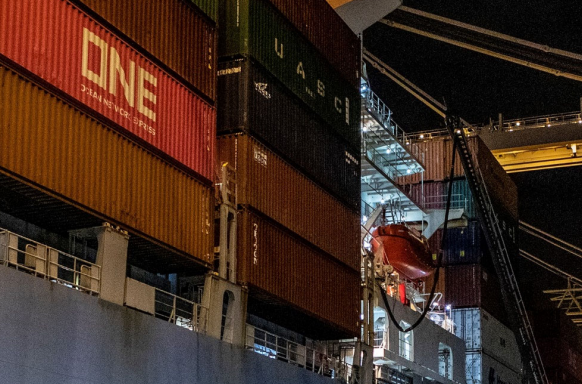 ONE trials sustainable biofuel on containership
Posted: 26 days ago
Port of Piraeus braces for a 48-hour strike
Posted: 17 days ago
Removal of dislodged containers from ONE Apus expected to take over a month
Posted: 2 months ago
Advertisement
Related jobs