One of world’s greenest tug construction programs kicks off

HaiSea Marine (HM), a joint venture partnership between the Haisla First Nation and Seaspan ULC, has announced the official start of its battery-powered and low emissions tugboat build program.

Once delivered in 2023, the new fleet is expected to be “among the greenest tugboat fleets in the world” and will provide ship-assist and escort towing services to LNG carriers calling at LNG Canada’s new export facility in Kitimat.

Designed by Vancouver-based naval architects and marine engineers Robert Allan Ltd. (RAL), the tugboats will be built at Sanmar Shipyards. They will use battery-electric power and natural gas instead of diesel fuel.

At 40 meters in length and with 100 tonnes of bollard pull, they will generate indirect forces of approximately 200 tonnes.

The RAstar 4000 DF escort tugs will perform the majority of their missions using natural gas as their primary fuel. This allows major emissions reductions compared to conventional diesel tugs of the same power, in compliance with the most stringent emissions standards in the international marine industry, IMO Tier III emissions standards.

In addition to these environmental benchmarks, the escort tugs will be capable of pollution response/oil spill recovery, fire fighting of marine terminal fires, person overboard response, and emergency towage of vessels.

On the other hand, the ElectRA 2800 battery-electric harbour tugs will perform the majority of ship-berthing and unberthing missions on battery power.

At 28 metres in length, with approximately 70 tonnes bollard pull and 5240 kWh of battery capacity each, these harbour tugs are designed to operate in tandem at LNG Canada’s new export facility.

“These dual fuel environmentally friendly vessels represent the future – they are revolutionary in both their technology and their ability to create opportunity for the Haisla people,” Frank Butzelaar, CEO, Seaspan Marine Transportation, commented.

“We are delighted that HaiSea Marine has chosen Sanmar to build the two dual fuel escort tugs and three battery powered harbour tugs that will serve one of the largest energy projects in Canadian history, the LNG Canada liquification and export facility in Kitimat,” Ali Gurun, Vice President of Sanmar, said.

“These five tugs will form the world’s most technologically advanced fleet to date,” he pointed out.

HaiSea Marine was awarded a major contract to build and operate escort and harbor tugs required for LNG Canada’s LNG export facility in Kitimat in 2019.

The value of the 12-year contract is approximately C$500 million ($376.6 million), according to LNG Canada.

With an ample supply of clean hydroelectric power available in Kitimat, the harbour tugs will be able to recharge from dedicated shore charging facilities at their berths between dockings, effectively resulting in near-zero emissions when running on batteries.

GHG emissions from the new tugs are expected to be significantly lower (54% and 24% respectively) than diesel powered alternatives.

The LNG terminal will be maintained by the JGC-Fluor BC LNG Joint Venture (JFJV) and operated by LNG Canada, a joint venture between Shell, PETRONAS, PetroChina, Mitsubishi and Korea Gas Corporation (KOGAS). 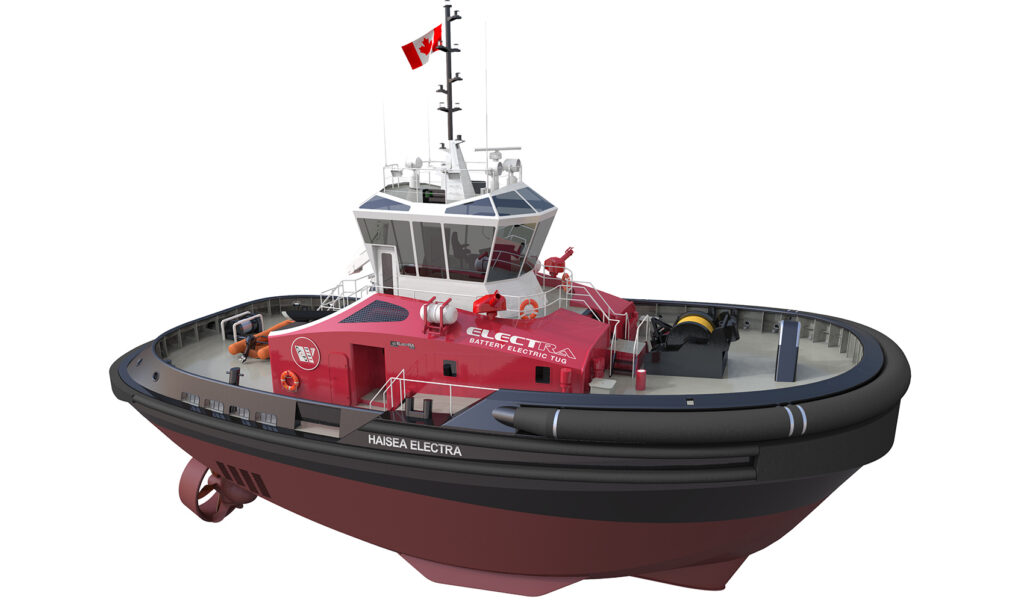