The Port of Rotterdam has joined the North Sea Wind Power Hub Consortium which wants to construct one or more so-called ‘Power Link Islands’ in the central North Sea.

With the partnership, the port wants to speed up efforts to develop large-scale offshore wind energy capacity in the North Sea. This is necessary to make Rotterdam’s industry sustainable, according to Allard Castelein, CEO of the Port of Rotterdam.

If one word was buzzing around last year, it was energy transition. If we want to leave behind a sustainable world for our children, we have to step away from fossil energy resources. Everywhere, initiatives are popping up in the spirit of this transition. On a small scale, homeowners are installing solar panels on their roofs.

Others think big. So does the Port of Rotterdam, which recently announced that it is the latest partner in the consortium. The consortium wants to create an energy island complex in the middle of the North Sea as part of a European system for sustainable electricity.

The port’s recent experience in seaward land reclamation –the construction of Maasvlakte 2 — is said to be an important asset for the consortium.

“We are experienced in seaward land reclamation, and we are happy to contribute this expertise to the consortium. We really need to speed up efforts to develop large-scale offshore wind energy capacity, and ensure this capacity is effectively integrated into the relevant plans of the North Sea countries,” Castelein said.

Together, the companies form a partnership that studies and investigates the possible development of a large-scale, sustainable European energy supply system in the North Sea. The basic idea of the plan is the construction of one or more Power Link Islands in the central North Sea, possibly the Dogger Bank, with interconnections to the countries bordering the North Sea.

The artificial islands will be situated at a location that offers ideal wind conditions. It will be possible to connect a large number of offshore wind farms to a Power Link Island. The location facilitates the distribution and transmission of wind-generated electricity via direct-current connections to the North Sea countries – the Netherlands, Belgium, the United Kingdom, Norway, Germany, and Denmark.

For far-offshore wind farm sites, a coordinated international approach with an island-based solution will be 30 per cent more cost-effective than the ‘business-as-usual’ connection model with HVDC converter platforms on individual jackets. Also, the electricity transmission cables will not only transmit wind energy to the connected countries but will simultaneously serve as interconnectors between the energy markets of the North Sea countries, enabling them to trade electricity across their borders.

Not only wind energy benefits. On a Power Link Island, wind power can also be converted to sustainable hydrogen for large-scale transport to shore or for storage or buffering purposes. Hydrogen is currently produced from natural gas with CO2 as a by-product.

Combining the strengths of electricity and gas supply systems may also provide a boost to the use of hydrogen as a sustainable solution in numerous applications in industry, transportation, and the built environment.

Power-to-gas conversion is expected to play an important part in the further analyses of the North Sea Wind Power Hub system. It could enable wind-generated energy to be converted into a gaseous form close to its sources far offshore and then brought ashore possibly using the existing offshore gas infrastructure.

“Industry needs sustainable electricity and hydrogen if it is to meet the climate change targets of the Paris Agreement,” CEO Castelein added.

According to calculations commissioned by the Port of Rotterdam, enabling the sustainable operation of Rotterdam’s industry alone would require between 27 and 49 TWh of generation capacity. Volumes in that order of magnitude can only be achieved in a sustainable way by offshore wind energy. Assuming 4,000 operating hours per year for offshore wind turbines, 27 to 49 TWh would require between 7 and 12 GW of installed capacity, equivalent to roughly 1,000 10 MW wind turbines. Right now, the most powerful wind turbines have a capacity of 6 MW.

To date, 1 GW of wind power capacity has been installed in the Dutch sector of the North Sea. Taking into account the offshore wind farm zones currently designated and earmarked, by 2023 this capacity will have been expanded by 3.5 GW. In other words, current plans fall far short of the requirement of Rotterdam’s industry.

At the moment, the ideas are in an early phase. The four electricity and gas grid companies and the Port of Rotterdam will join forces for the purpose of continuing their studies into the development of a large-scale, sustainable European energy system in the North Sea.

The construction of the Power Link Island(s) will mean a boost in maritime activities in the Netherlands. Some estimate that it will create 30,000 jobs in the year 2030.

This article was previously published in Maritime Holland edition #7 – 2017. 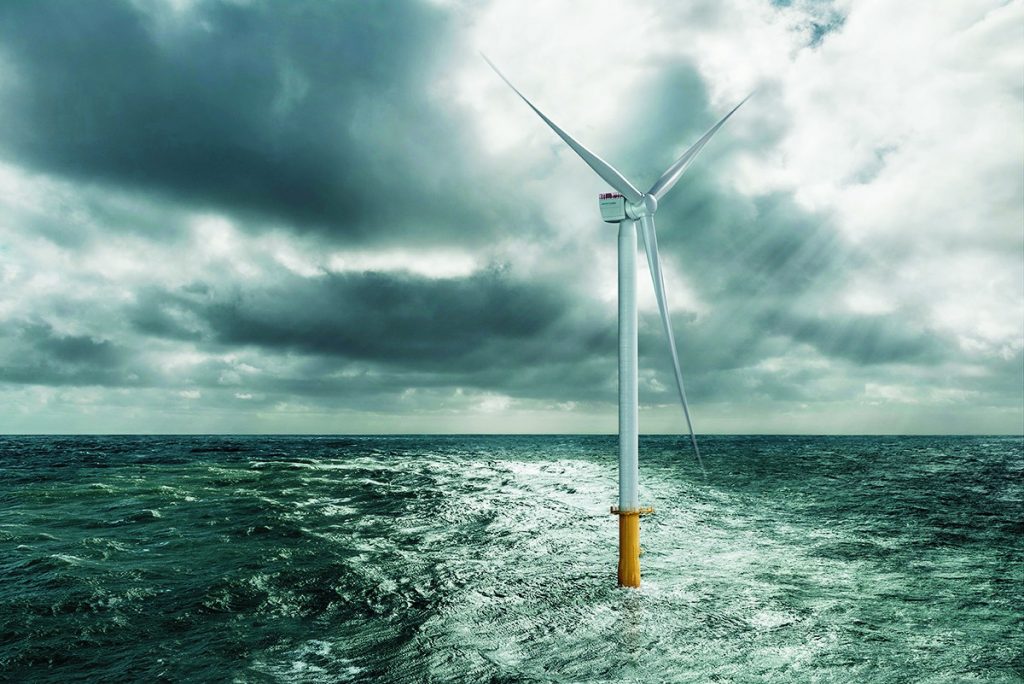