Retrofit – Complying to the Regulations of the Future

When looking up the term ‘retrofit’ in the dictionary, one finds it defined as ‘to provide (a jet, automobile, computer of factory, for example) with new or modified parts or equipment not in existence or available at the time of original manufacture’. This term is also applicable to vessels, especially now many new environmental regulations are coming up that ships need to comply to.

During the seminar ‘Teaming up in the retrofit market’, recently held by Netherlands Maritime Technology (at that time still HME), several retrofit solutions, scrubbers, ballast water treatment systems and SCR, to be able to comply to the future regulations were discussed. Dick Brus of the Ministry of Infrastructure & the Environment told the participants about upcoming environmental legislation in five areas – sulphur oxides (SOx) and particular matter (PM), nitrogen oxide (NOx), carbon dioxide (CO2), ballast water and recycling -that call for new technologies. Firstly, SOx and, indirectly, PM (as there are no explicit PM emission limits): effective from 1 January 2015, the limit of sulphur in fuel in Sulphur Emission Control Areas (SECAs) will be reduced to 0.1 per cent, by 1 January 2020 the global sulphur cap will be reduced to 0.5 per cent, according to Marpol Annex VI regulations of the International Maritime Organisation (IMO).

In 2016, Tier III of the revised Marpol Annex VI will become effective, making NOx emission in Control Areas NECAs (approved: North American Coast and US islands in the Caribbean, expected: Baltic Sea) on average 80 per cent stricter. Regarding CO2, IMO adopted the Energy Efficiency Design Index, an energy performance standard for new vessels, and the Ship Energy Efficiency Management Plan for all vessels in Marpol Annex VI in July 2011.

The Ballast Water Management Convention, adopted in 2004, aims to prevent the spread of harmful aquatic organisms from one region to another, by establishing standards and procedures for the management and control of ships’ ballast water and sediments. It will come into force twelve months after ratification by 30 states, representing 35 per cent of world merchant shipping tonnage. In February 2014, 33 states had ratified, 30.4 per cent of the world tonnage. Brus expects the convention to probably come into force in 2015.

Last, but not least, IMO adopted the Hong Kong Convention in 2009, with the goal to ensure that ships, when being recycled, do not pose any unnecessary risks to human health, safety and the environment. The IMO guidelines include the development of the Inventory of Hazardous Materials, ship inspections, surveys and certification, the authorisation of ship recycling facilities, safe and environmentally sound ship recycling and the development of the Ship Recycling Plan. This convention might come into force in 2020.

Options to comply to SOx regulations

For ship owners, the limit of SOx in fuel is the most urgent and closest adjustment they have to adapt to. Which possibilities do they have? First of all, ship owners can sail on cleaner marine diesel oil in the SECAs instead of heavy fuel oil. This, however, can become an expensive affair because of the price difference and it is expected that the price for marine diesel oil will rise in the years to come, probably by 15 to 20 per cent, according to Lloyd’s Register (March 2014). Secondly, ship owners can choose to retrofit the vessel’s engines to dual fuel, enabling the vessels to sail on LNG. However, the pay-off time of this option is quite high, show the results of the European ‘Retrofit’ project, a cooperation between 14 organisations from seven European countries subsidised by the European Union: on average, the pay-off time amounts to eleven years. According to the same study scrubbers, a third option, are the most economic solution for vessels running on heavy fuel oil, with a pay-back time that can be as short as one one year, if the vessel sails within the SECAs for 100 per cent.

During the seminar, Ralph Dazert, market analyst at Netherlands Maritime Technology, gave an overview of the scrubber market. Of the 87,000 merchant vessels in the world fleet (UNCTAD, 2013), roughly 20,000 are eligible for retrofit. According to numbers by Alfa Laval, provider of the scrubber system PureSox, vessels need to trade 40 per cent or more of their time in SECAs to reach the break-even point for a scrubber. Up until now about 100 retrofits have been performed or announced, another 2,200 retrofits are expected between 2015 and 2020, say Alfa Laval and shipping company Spliethoff. The majority of the retrofit orders were announced during the last six months, which means that the market is picking up, states Dazert.

Philippe Brands, sales engineer exhaust gas cleaning at Alfa Laval Aalborg based in the Dutch town of Nijmegen, agrees with Dazert: “Up until now we have installed about ten scrubbers, the total of our orders exceeds 40, most of them placed in the last six months. Recently we signed a contract with Finnlines to retrofit four vessels with PureSOx during the end of 2014 and beginning of 2015. It has taken some time, but we see that ship owners are starting to invest now and we expect that this will continue.”

Alfa Laval’s exhaust gas cleaning system PureSOx consists of a jet scrubber and an absorber and removes sulphur oxides from the ship’s exhaust gas by scrubbing it with sea water or fresh water. By using PureSOx, ship owners are able to continue operating on heavy fuel oil instead of marine gas oil while still meeting the strict IMO regulations regarding sulphur oxide emissions, as the sulphur removal rate is more than 98 per cent (exceeding the IMO requirements) and PM trapping is up to 80 per cent, according to Alfa Laval. Brands: “This chemical process is over 100 years old, Alfa Laval has over 40 years of experience because of its inert gas systems, with more than 4,000 systems with scrubber section sold to date. This system was used as a reference point for the PureSOx system, which is bigger and needs to be made of corrosion-resistant materials, among others. We started in 2008 with a land-based set-up in cooperation with MAN Denmark to verify the process. For retrofits, it is important to take a thorough look at how to integrate the system in the vessel as the installations are customised and it takes time to find the right solution for a vessel. A thorough preparation is necessary, an accurate planning together with prefab fabrication helps to keep the docking time as short as possible, we learned during the first installations.

”We offer hybrid, closed-loop and open-loop systems”, he continues. ”Sea water works well as scrubbing substance, but in some ports or sensitive areas, it is not desired to discharge the used water, so it is re-used. As the water becomes warmer when it is used for a longer time, a heat exchanger is needed, and of course the water will consist more and more sulphates, that need to be discharged at some point. As the sea waters already contain sulphates, the increase of sulphates because of the discharging is harmless. The particular matters are filtered and the generated sludge has to be picked up by specialised companies in a port. We are proud of our water cleaning unit, as it is a difficult process to clean the water from particular matters and we have the right separator technologies to do so.” Alfa Laval installed the first scrubber on the DFDS ro-ro vessel Ficaria Seaways in 2009 and up until now the system has been in operation for more than 13,000 hours and works well.

The Spliethoff Group, based in Amsterdam, the Netherlands, also decided to go for the option to place scrubbers in their Transfennica vessels. The first vessel, the con-ro vessel Plyca, was the second vessel that Alfa Laval equipped with a PureSOx exhaust gas cleaning system, installed late 2012. Gerrit Jan van Ommen, conversion project manager at Spliethoff Group, explains: ”We have chosen the scrubbers as we think this is the most economically viable option. We mainly looked at the option to sail on marine diesel oil or scrubbers, and the time spending in SECAs, the price differences between heavy fuel oil and marine diesel oil and the installation costs of a scrubber were the three elements that we considered when making the decision. The pay-off time is difficult to predict, but we expect to have earned back the investment within three to four years.”

Brands adds: ”The pay-off time of the scrubber is based on the savings on fuel, the difference between the costs for heavy fuel oil and marine diesel oil. For large vessels that use a lot of fuel the savings can accumulate to millions per year, which means that the pay-off time of the scrubber will be about one and a half to two years, or even less. For smaller vessels it will take a bit longer, but for every vessel with an engine power of three megawatts or more, a scrubber could be interesting.”

“Spliethoff assigned a dedicated project manager to the retrofit who handled the project with structure and had a good planning”, Brands memorises the project. ”The documentation needs to be in place to be able to prepare everything.” Van Ommen: ”Together with Alfa Laval, Lloyd’s Register and the Dutch flag we work on the final certification for compliance, we continuously monitor data of emissions and wash water, with good results, so we expect to be finished soon. The scrubber technology is an existing technology, but application on vessels needs to comply to recently written regulations and that sometimes proves to be difficult. Together with the classification society, the flag state and the supplier we look for the right method for application, which is not always simple.”

Van Ommen continues: ”We are content with the scrubber installed on Plyca and therefore we will start to also equip her five sisters from the same series with scrubbers in June. The engineering and production process of a scrubber takes about nine months, the actual installation takes about three to five weeks. As the installation means that the vessel is not operational in that period, we try to combine the installation with regular maintenance, although this is not always possible as the vessels need to be finished when the regulations come into force in January 2015.” Brands concludes: ”The scrubber system is easy to use and the complete crew is able to operate it. Actually, there is only one important word for us: reliability, you need to make sure that you are in compliance. If you cannot comply to the guidelines, the investment was worthless and therefore it is important for ship owners to make a thorough decision.” 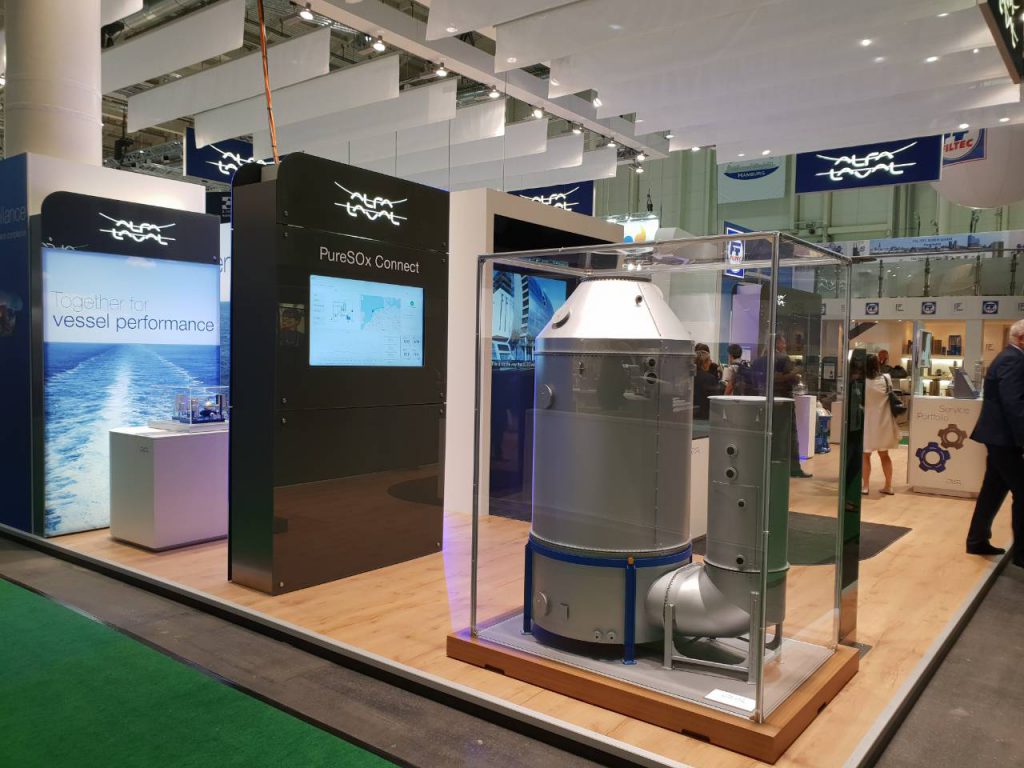