After setting the record for the fastest unmanned Atlantic crossing, Saildrone USV SD 1021 has completed the return journey, not only beating its own record time but also becoming the first autonomous vehicle to transit in both directions across the Atlantic Ocean.

In August 2019, a Saildrone unmanned surface vehicle (USV) known as SD 1021 arrived in the United Kingdom from Newport, RI, setting a record for the fastest unmanned Atlantic crossing. Now that same vehicle has completed the return trip to Newport, becoming the first autonomous vehicle to complete a westbound passage, as well as the first unmanned technology to transit in both directions across the Atlantic.

SD 1021’s arrival to Lymington, UK, on the Solent coincided with Cowes Week, a nearly 200-year-old annual regatta that attracts some 1,000 sailboats from around the world. The vehicle remained in the UK for the duration of the regatta for regular maintenance and was re-deployed for the return trip on August 15, 2019.

There are two typical transatlantic passages: from west to east, vessels take the northern route from New York to the English Channel, benefitting from prevailing westerlies and favorable current; east to west, vessels take the southern route, from Spain to Bermuda or the Caribbean. Though the southern route is nearly 1,000 nautical miles (1,850 kilometers) longer, crewed vessels enjoy a smoother ride sailing with the trade winds and favorable current.

Saildrone USVs are designed to perform in the harshest ocean conditions on the planet, including those that crewed ships often avoid. On its return trip, SD 1021 took the direct northern route, sailing predominantly upwind and against the current, completing the 3,402-nautical mile (6,301.59-kilometer) passage in 68 days.

The vehicles are powered exclusively by the wind for propulsion and use solar energy to run onboard computers and navigational instruments. They are equipped with a suite of science-grade sensors to collect oceanographic and meteorological data above and below the sea surface including wind speed and direction, air and sea surface temperature, atmospheric pressure, photosynthetically available radiation, wave height and period, dissolved oxygen, salinity, and acidity levels. In addition to the standard Saildrone sensor suite, SD 1021 is also equipped with an Acoustic Doppler Current Profiler (ADCP) to measure current strength and direction.

To date, SD 1021 has sailed a total of 14,969 nautical miles (27,722 kilometers) since its first deployment in the Arctic in 2018. The saildrone was subsequently deployed from Newport on January 31, 2019, on a 30-day mission to measure wintertime air-sea heat and carbon exchange in the Gulf Stream. SD 1021’s carbon composite wing was damaged in a Gulf Stream storm with winds gusting to 58 knots (107 km/h) and waves over 12 meters (40 feet) high. The vehicle’s backup systems allowed it to navigate to Bermuda where it was retrofitted with a new wing and deployed for the Solent.

“The endurance, reliability and scientific measurement capabilities of the Saildrone platform continue to grow from strength to strength,” said Richard Jenkins, Saildrone founder and CEO. “During 2019, our saildrones have circumnavigated Antarctica, spent 700 days in the Arctic sampling the retreating ice edge, completed our first survey of the North Sea, and now crossed the hostile North Atlantic in both directions. There is no part of the [unfrozen] ocean that we cannot now measure.”

Saildrone’s fleet of USVs is actively engaged in fisheries, bathymetry, and climate science missions around the globe, with an additional 50 vehicles expected to deploy in 2020. 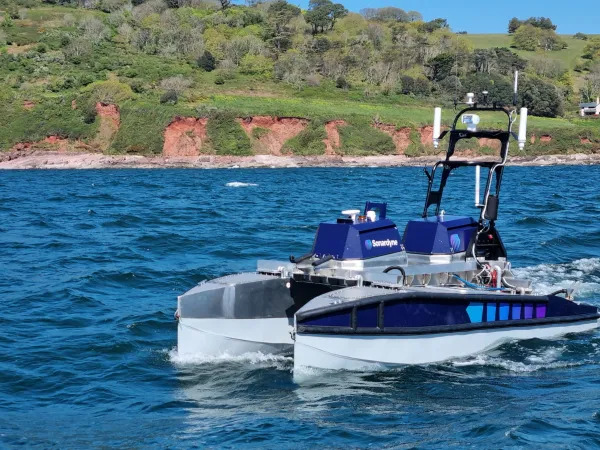