The company behind the order is an undisclosed shipowner based in Africa, according to a stock exchange filing.

The two gas carriers are slated for delivery by the end of 2025.

SHI is on track of meeting its yearly orderbook target of $8.8 billion, having secured orders for 339 ships this year, worth $7.4 billion, Yonhap reports.

Prompted by the ever-stricter environmental regulations in the maritime industry, Samsung has been active on numerous fronts with respect to exploring vessel designs including ships running on alternative fuels, such as ammonia, hydrogen carriers and liquified carbon dioxide carriers (LCO2).

The shipbuilder has already secured approvals for the design of a 20,000 cbm liquefied hydrogen carrier and ammonia-ready VLGC design.

Carbon capture is another area of interest for the shipbuilder, and SHI has teamed up with German chemical producer BASF on a collaborative feasibility assessment of capturing CO2 onboard maritime vessels.

At the beginning of this year, SHI revealed an approval in principle (AiP) for its newly developed onboard carbon capture and storage applicable to LNG-fueled vessels.

The technology was developed together with a compatriot company for eco-friendly marine applications Panasia. They have been working on this CCS technology since 2020.

The approved technology separates and collects carbon dioxide from the exhaust gas after LNG is burnt in a ship engine or generator using an Amine-based liquid absorbent.

At the moment, the shipbuilder is conducting a technology performance test at a demonstration facility by Panasia in Jinhae, South Gyeongsang Province.

The company believes carbon capture will go hand in hand with LNG as a marine fuel as an economically viable solution to further clamp down on emissions and future-proof ships running on LNG. 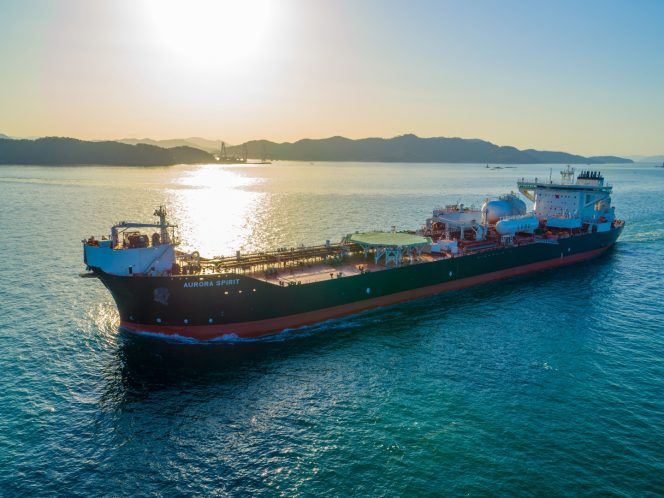