The agreements were signed at the 24th St. Petersburg International Economic Forum, which took place on 2–5 June 2021, by Igor Tonkovidov, President and CEO of Sovcomflot, and Roman Dashkov, CEO of Sakhalin Energy.

Signing the agreements, Roman Dashkov, Sakhalin Energy’s CEO, stressed: “This result comes after five years of Sakhalin Energy’s meticulous efforts in actively analysing the market, studying trends, and anticipating the future demand for increased focus on the environmental protection and carbon footprint reduction. The agreement that we signed today (4 June) logically stems from this anticipation and puts our long-term strategy into practice”.

As disclosed, the Aframax tankers, Korolev Prospect and Vernadsky Prospect, will carry Sakhalin Blend oil to the Asia Pacific region.

Both tankers comply with the latest safety requirements and meet Russian and international environmental standards regarding equipment and energy efficiency requirements.

Additionally, the vessels have the option of using liquefied natural gas (LNG) as the primary fuel for the main and auxiliary power units. Compared to standard fuels such as marine fuel oil and diesel, LNG is considered to reduce the vessel’s greenhouse gas emissions into the atmosphere.

Prior to delivery, both tankers will be upgraded with manifolds to take in natural gas fuel from the Prigorodnoye production complex LNG jetty.

The vessels will be delivered to the charterer in 2024 and employed to shuttle crude oil for the Sakhalin-2 project for ten years.

“We are particularly pleased that the use of green tankers at the Sakhalin-2 project will reduce the carbon footprint of shipping in the Far Eastern basin. Signing the new long-term time charters will support the SCF-2025 strategy,” Igor Tonkovidov, Sovcomflot President and CEO noted.

The 150th operation was carried out by Korolev Prospect, on time charter to Chevron.

Aframax crude oil tanker Korolev Prospect was built in 2019 and is currently sailing under the flag of Liberia. Chevron will be using the vessel to trial the viability of dual-fuelled tankers for its future operations. 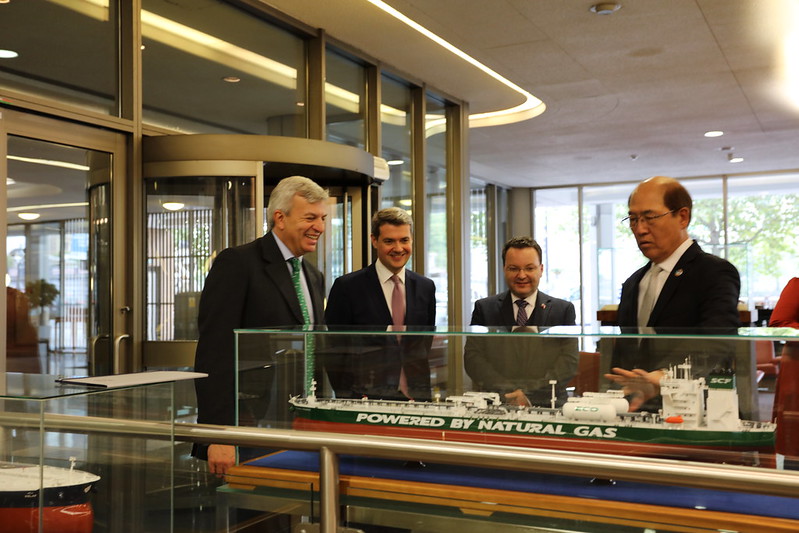