The second mega container ship in Maersk Line’s E-class, the “Eugen Maersk” is to call at EUROGATE Container Terminal Wilhelmshaven in July (week 29).

The “Eugen Maersk” operates on the AE10 service (Far East – Europe) and is planning an unscheduled port call in Wilhelmshaven. On 4 July 2013 and on 11 July 2013, the feeder vessels “Maersk Ohio” (4,544 TEUs) and “Santa Ricarda” (4,112 TEUs) are expected to deliver containers to the terminal for loading onto the “Eugen Maersk”.

EUROGATE Container Terminal Wilhelmshaven uses the biggest gantry cranes in the world to load and unload container ships. These cranes are capable of spanning 25 rows on deck. By way of comparison: the “Eugen Maersk” has 22 container rows on deck. However, it is not only the technology of this large-scale equipment that is ground-breaking. The organisation of ship clearance processing is just as innovative. This is based on experience gained at other container terminal facilities. Thanks to this experience, EUROGATE Container Terminal Wilhelmshaven is able to manage optimised operations with highly productive processes.

The large container vessel “Eugen Maersk” is a member of Maersk Line’s E-class and after delivery of the first 18,000-TEU vessels the world’s third largest class of container ships. At 397 m she is one of the longest container vessels in the world. Ships in the E-class have a load capacity of 15,000 standard containers (TEUs). 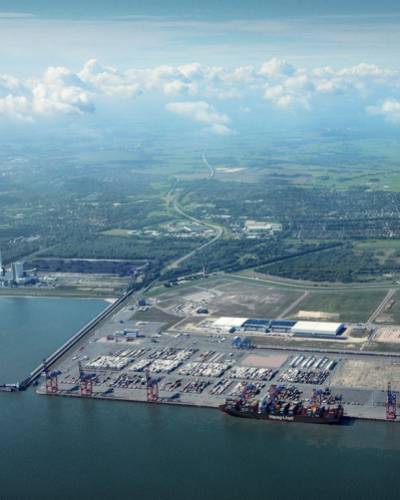