Shore-power — the provision of electricity for ships while in dock so they don’t need to use their diesel engines — is taking off in Europe but is held back in the UK by high electricity taxes and a lack of government support.

Governments in France, Germany, Norway, Denmark and Sweden are helping their ports deploy shore-power, with grants for investment and reductions in electricity taxes. But the UK is not. The imminent Transport Decarbonisation Plan is a big opportunity for the UK Government to rectify this and meaningful support should start as soon as this week’s budget, according to the British Ports Association (BPA).

The research, undertaken by the Tyndall Centre for Climate Change Research at the University of Manchester, gathered evidence from across the maritime sector and beyond – ports, shipping companies, equipment suppliers and network operators.

Its findings revealed that there is widespread interest in shore-power for reducing the emissions from ships whilst they are in port. There is a strong consensus that electrification is a key part of the decarbonisation solution for maritime and that its use should grow.

However, the research also laid bare the barriers to this potential being realised. Shore-power projects are difficult and expensive, with few if any going ahead worldwide without government support. And ports are often constrained by lack of energy network capacity in their area– and complex regulation of the energy system.

The report argues that these barriers can be overcome, with a central role for government through:

“Ports and the maritime sector are committed to reducing emissions and playing their crucial role in a net zero future for the UK. Today’s research shows the hunger from industry to increase electrification of its activities,” Tim Morris, CEO of the UK Major Ports Group, commented.

“We as industry know we have more to do, but Government has an essential enabling role to play. Government needs to back its ambition and targets with investment support and improvements to the energy system.”

“This is a big year for maritime and there is now a firm consensus as to the main barriers to the widespread electrification of ports, including the installation of shore power for ships. The industry is ambitious and committed to its role in supporting the reduction of emissions from ships and this report helps to demonstrate that there is clear role for Government here, too,” Mark Simmonds, Director of Policy and External Affairs for the British Ports Association, said.

“Many European Governments have strong policy support for their ports to deploy shore-power. The UK does not – the imminent Transport Decarbonisation would be the ideal place to rectify this,” Simon Bullock, the lead researcher on the report from the Tyndall Centre for Climate Change Research at the University of Manchester, noted.

The British Ports Association also published its own paper on shore power in 2020. It found that no ports in the world have installed shore power without public funding or subsidy and that a green maritime fund is needed in the UK to support emissions reductions for ships at berth. 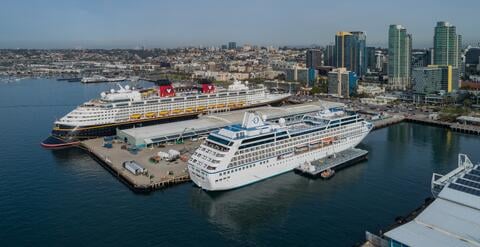