Smit Salvage to refloat grounded bulker from reef off Mauritius

Smit Salvage has been awarded the contract to refloat the giant bulker that ran aground off Mauritius over the weekend.

Local contactor CELERO will also join the salvage operation and assist in the pumping out of fuel from the ship.

The Capesize bulker Wakashio is believed to be carrying 3,894 tonnes of low-sulphur fuel oil, 207 tonnes of diesel and 90 tonnes of lube oil.

According to the Ministry of Environment, there has been no oil spill from the vessel in the area, which is close to the Blue Bay Marine Park, a pristine national park teeming with marine life.

The country’s Environment Minister said the ship’s hull had not been damaged, however, the ship’s engine room was flooded due to the rupture of a water hose pipe.

Two tugs with oil response equipment have been dispatched to the scene, and an additional tug is on standby.

The Panamian-flagged Capesize bulker, built in 2007, was underway in the Indian Ocean from China to Brazil when it ran aground on a reef a few meters from the beach. The ship was sailing with 20 crew and had no cargo on board when it got grounded.

Local reports indicate that the crew had been tested for Covid-19, and that all of the seafarers tested negative. The testing was necessary to be carried out before salvage personnel could board the ship to assess the situation, and decide on the final plan.

The 203,000 dwt ship is managed by Japanese company Nagashiki Shipping. 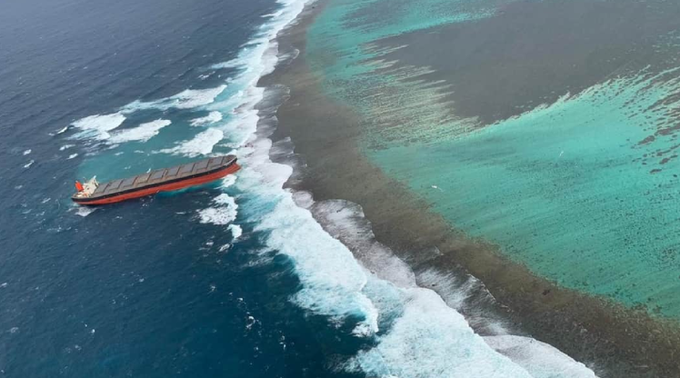