Sumitomo and LOTTE to jointly pursue hydrogen and ammonia projects

Sumitomo and LOTTE Chemical have signed a memorandum of understanding (MoU) to jointly look into a wide range of business development opportunities related to hydrogen and ammonia.

This includes joint investments in hydrogen and ammonia production projects in Australia, Chile, and other regions and the establishment of value chains in Japan and Korea as well as the development of ammonia storage terminals in Japan and Korea.

Commercialization of new hydrogen and ammonia-related technologies and their deployment in the Japanese and Korean markets and collaboration in the carbon capture, utilization and storage (CCUS) are also included in the MoU.

This is not the first collaboration on such projects for Sumitomo and LOTTE Chemical. To remind, the two companies are working with Syzygy Plasmonics, a US hydrogen technology startup with advanced photocatalytic technology, to conduct the world’s first joint demonstration test of hydrogen production by ammonia decomposition using photocatalyst in Korea.

Seeing hydrogen and ammonia as one of the key energy sources in a decarbonised society, Sumitomo said it will also consider and promote an ammonia bunkering business in Singapore, design and development of ammonia-fueled ships, and development of infrastructure for marine transportation and storage.

“Through these efforts, we aim to handle 300,000 tons of hydrogen by 2030, which is approximately 10% of the Japanese government’s target for hydrogen imports, thereby securing a leading position in Japan”, the company stated.

In parallel, LOTTE Chemical plans to produce, supply, and utilize 1.2 million tons of clean hydrogen by 2030, based on large-scale demand, a large-scale supply network, and eco-technologies. 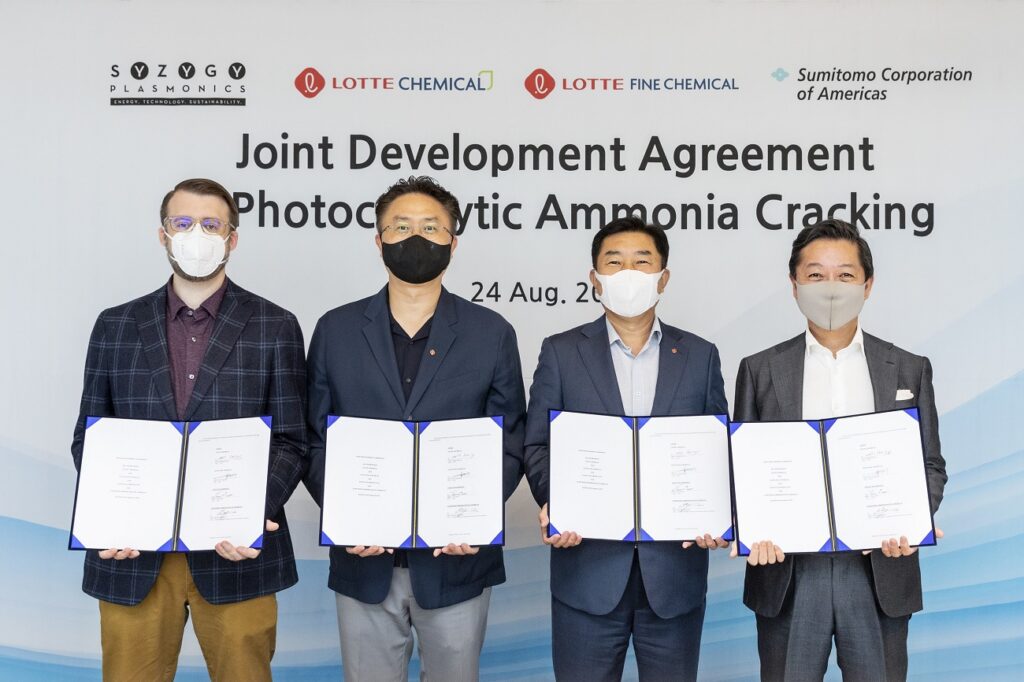 LOTTE, Sumitomo to adopt tech in race to procure clean hydrogen
Posted: 3 months ago
Study launched to assess power supply for green hydrogen/ammonia project in Malaysia
Posted: 2 months ago
Sembcorp forges ties with Japan on hydrogen and decarbonisation initiatives
Posted: about 1 month ago