Ballast Nedam today released its financial results for the first half of 2013.

Narrow operating profit for first half, and forecast for 2013 upheld

Ballast Nedam narrowly achieved an operating profit for the first half in steadily declining markets that are marked by cut-throat competition, price erosion and insolvencies. Excellent results were achieved on several large multiyear projects and in the niche markets. Ballast Nedam is accordingly focusing on the growth market of integrated projects and on niche markets such as industrial construction, offshore wind turbines, alternative fuels and secondary raw materials. The Government Buildings Agency’s recent selection for the Penitentiaire Inrichting Zaanstad PPP project, and the City of Amsterdam’s preliminary award of a 25-year area concession for the Food Center Amsterdam, endorse the strategic focus on integrated projects. Pending financial close, these and several other projects, such as the Westermeerwind nearshore wind turbine project and the E and F piers at Schiphol Airport Amsterdam, have yet to enter the order book.

The restructuring of the regional infrastructure companies is well on schedule, and the first signs of an improvement in the results are visible. The sustained decline in the residential housing construction market will entail a further capacity adjustment of the regional construction companies in the second half, in line with these market conditions. After taking the usual seasonal effects into account, several Specialized Companies that operate on capacity-driven markets performed poorly. Additional capacity adjustments to follow last year’s restructuring are in preparation.

For the full year of 2013 we are upholding the previously announced forecast of an operating profit of approximately € 15 million.

The pressure on the volume in the infrastructure market is undiminished. Competition is also increasing for the major projects and in the industrial construction niche market, whereas the offshore wind turbines niche market remained favourable.

In view of the market conditions, Infrastructure achieved a sound profit of € 5 million on a 5% lower revenue. The timing of the execution of the major projects last year has meant that most of the profit materialized in the first half.

Solid results were achieved on the major projects and in the niche markets. Although ongoing projects prevented the regional companies from contributing, the first signs of an improvement in the results are now visible. The strategic choice to abandon the regional procurement market for smaller traditional contracts, and to focus instead on the larger, more integrated projects, would also appear to have been vindicated. The capacity adjustment is on schedule, and is many times larger than the decline in market volume. Accordingly there will be less exposure to loss-making markets.

In recent years, offshore projects have become larger, further offshore, and in deeper water. In the coming years the offshore industry will focus on cost reduction, rising to 40% in 2020. Ballast Nedam is investing in cost reduction in offshore wind energy through innovation that is oriented to installing foundations for offshore wind turbines.

Internationally, we see opportunities in countries where we have operated for several years in projects with a civil engineering element. Our approach is also account-driven, with an emphasis on major clients with international operations.

Infrastructure’s total assets declined somewhat relative to the first half and year-end 2012, to € 211 million.

The order book contracted in the first half by € 113 million to € 787 million, because of good progress on several large multiyear projects, running down capacity in the regional companies, and the absence of large multiyear project acquisitions in the past year. Nonetheless, the regional infrastructure operations in consortium won the Amsterdam-Rhine Canal bank restoration design & construct project, for more than € 30 million. Other successes in the first half were in the offshore wind turbines niche market, including the start of the Butendiek offshore wind turbine project in Germany, of more than € 250 million. The eighty foundations will be installed in 2014. A contract was also signed for the installation in the second half of this year of 39 foundations for the EnBW Baltic2 offshore wind farm in Germany. Yet to be entered in the order book is the Westermeerwind contract for the design, delivery and installation in 2015 of the foundations for 48 wind turbines for a wind farm in the Northeast Polder. Within the industrial construction niche market, several major projects, such as the Magnum multifuel generating plant for Nuon and the Biopower plants for Eneco, are in the final phase. 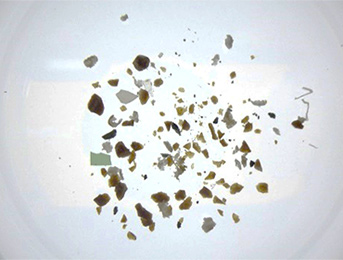