The dual-fuel crane ship Sleipnir, that was just completed in Singapore, was supplied with over 3,000 metric tons of the chilled fuel offshore Sumatra, South East Asia.

This is the largest quantity of LNG that has ever been bunkered and proves that this upcoming fuel is available anywhere now, Titan LNG said.

“I’m extremely proud of the Titan team that has successfully completed the largest LNG bunkering in the world. It was a complex project to supply this eight-legged innovative crane vessel, the Sleipnir,” Niels den Nijs, CEO Titan LNG, commented.

“Titan LNG looks forward to supplying Heerema with more LNG in the future to fulfill our mission of lowering harmful emissions of the marine and industrial sector.”

Titan LNG chartered the Coral Fraseri, the newest addition of the Anthony Veder small scale LNG pool of vessels, for this operation. The ship loaded in Singapore at the SLNG terminal where Titan LNG sourced the fuel from Pavilion Gas. The Coral Fraseri followed the Sleipnir offshore and performed a ship-to-ship operation to cool down and fill the tanks.

Built at Sembcorp Marine’s Tuas Boulevard Yard, Sleipnir has a 220-meter by 102-meter reinforced deck area and can accommodate 400 persons. It will be deployed globally for installing and removing jackets, topsides, deep-water foundations, moorings and other offshore structures. 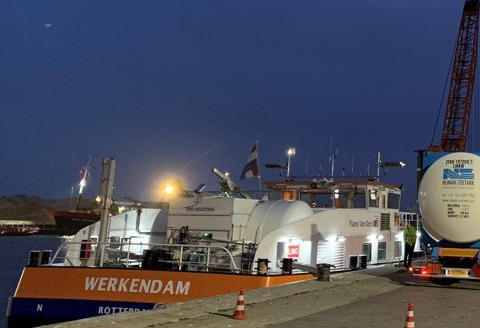