BP’s Juniper offshore platform has begun its journey towards the southeast coast of Trinidad where it will be installed as BP’s 14th offshore installation.

BP says the $2 billion Juniper project is one of its largest start-up projects in 2017. The project is operated by BP’s subsidiary BP Trinidad & Tobago.

“A little over two years ago the Juniper project was sanctioned and, at that time, it represented a significant milestone as an important part of the future of bpTT,” said Norman Christie, bpTT regional president. “Today, we are pleased to see the project progress even further and closer to start up with the sail away of the jacket and topsides. This is a fantastic achievement by the project team and is a very visible sign of our commitment to maintaining a successful long term business in T&T.”

The Juniper project comprises a platform made up of jacket, piles and topsides, and corresponding subsea infrastructure which will be installed 50 miles offshore in 360 feet of water. It is the sixth platform that bpTT fabricated in T&T.

As bpTT’s first subsea field development, Juniper will have a production capacity of approximately 590 million standard cubic feet a day (mmscfd), which will flow through the Mahogany B offshore hub.

“The Juniper project is significant for both BP and T&T,” Christie added. “At the peak of the project, there were over 750 workers on-site at TOFCO — 95% being Trinidadian and more than half from the surrounding La Brea community. The gas from Juniper will be the largest volume of gas brought into the country in several years. I look forward to seeing this project starting up and bringing much needed natural gas that can help alleviate the supply and demand imbalance in T&T.”

The Juniper topsides were fabricated at the TOFCO fabrication yard in La Brea, Trinidad and measure 145 feet tall to the top of the helideck and weigh about 5,100 short tons. The jacket and piles, fabricated at Gulf Marine Fabricators in Aransas Pass, Texas, sailed to Trinidad in December 2016. The jacket measures 389 feet tall and weighs roughly 5,200 short tons. The platform installation is being handled by the Thialf, the largest deepwater construction vessel operated by Heerema Marine Contractors.

The Juniper facility will take gas from the Corallita and Lantana fields located 50 miles off the south east coast of Trinidad in water-depth of approximately 360 feet.  Drilling of the five subsea Juniper wells by the Diamond Ocean Victory semi-submersible rig started in May 2015. First gas from the facility is expected in 2017. Gas from Juniper will flow to the Mahogany B hub via a new ten kilometer in-field flowline which was installed in 2016. 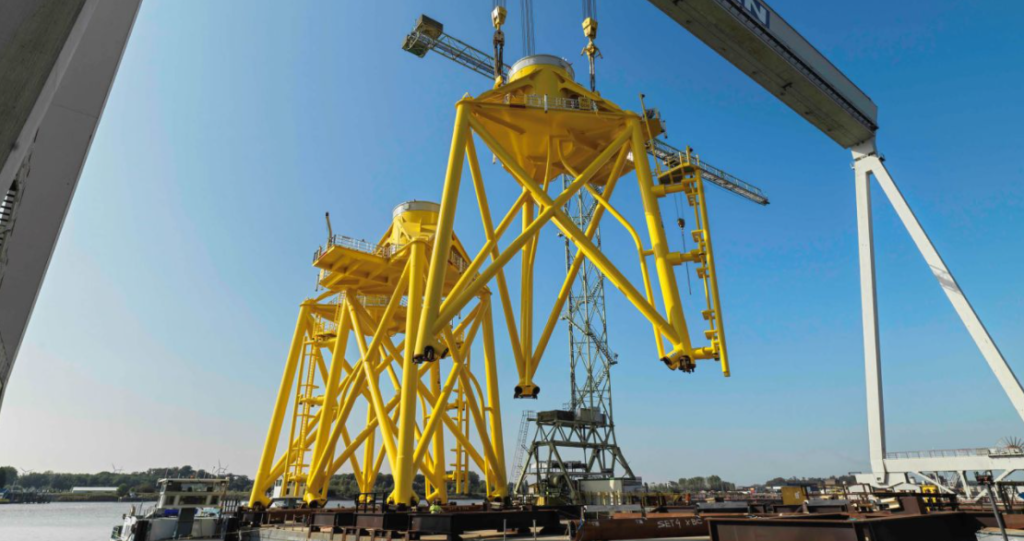