U.S.-based contractor McDermott International has completed the sail away of a gas processing module for the TotalEnergies-operated field in the Danish North Sea and this journey is expected to take around one month.

This comes just days after McDermott completed the load out of this gas processing module for the Tyra field, which was undertaken on behalf of TotalEnergies and its Danish Underground Consortium partners Noreco and Nordsøfonden.

Following the completion of two bridges and a flare last year, the U.S. firm worked on the construction of the Tyra East G (TEG) module, which was the only remaining module with onshore fabrication still ongoing after an installation campaign this spring with seven out of eight modules already installed offshore. Due to global supply chain challenges that impacted the fabrication work on the TEG process module, TotalEnergies revised the first gas date for the Tyra redevelopment project last month.

In an update on Thursday, McDermott International revealed that the Tyra East G gas processing module for the Tyra redevelopment project set sail on 1 September from the firm’s facility in Batam, Indonesia. The U.S. player explained that the module weighs approximately 18,700 tons – 17,000 metric tons – and is the culmination of more than 18.8 million work hours of engineering and construction work.

Tareq Kawash, Senior Vice President, Onshore of McDermott, remarked: “This is an incredible milestone on a large-scale and complex project.”

The company also pointed out that this TEG module will be a “crucial part” of Tyra II, which will be “the new high-tech hub for Denmark’s natural gas production and will reduce CO2 emissions by 30 per cent.” According to McDermott, the Tyra redevelopment project represents “the largest ever oil and gas investment in the Danish North Sea,” and once the redeveloped Tyra II is back on stream, it is expected to deliver 2.8 billion cubic meters of gas per year which amounts to 80 per cent of the forecasted Danish gas production.

The U.S. firm outlined that the Tyra II will secure continued production of natural gas, contributing to Denmark’s energy security by reducing Denmark and the EU’s dependency on Russian gas. McDermott further elaborated that the new facilities will be located approximately 139 miles (225 kilometres) west of Denmark in the North Sea.

Eric Delattre, Managing Director for TotalEnergies Exploration & Production Denmark, commented: “The sail away of the process module is of key importance for the Tyra redevelopment project as it marks the conclusion of onshore construction, and with this all the remaining work on Tyra II will take place in the Danish North Sea. The sheer size and magnitude of the process module is just incredible, and it will be fabulous to unite this final major component with the remaining platforms at the Tyra field in the next month.”

In a separate statement, TotalEnergies’ partner, Noreco, confirmed the sail away of the new Tyra II process module, adding that the heavy transport vessel GPO Emerald will bring this unit to the Tyra field in the Danish North Sea following a voyage of 8,700 miles, which is expected to take approximately one month. Once the module arrives at the field, it will be lifted and installed by the world’s largest crane vessel, Sleipnir.

Marianne Eide, Noreco Chief Operating Officer, stated: “We have recently made good progress and the process module is leaving the yard with CE approval, mechanically complete, and with all leak testing successfully concluded. We are now entering the final stage of the project where the main focus will be on the offshore hook-up and commissioning work prior to the delivery of first gas.”

Furthermore, the firm highlighted that the TEG will be able to process 300 million standard cubic feet of gas per day at peak coming from the Tyra field and five unmanned satellite fields. Noreco concludes that the redeveloped Tyra will be “a critical contributor in safeguarding access to natural gas for both Denmark and the European Union for decades to come.” 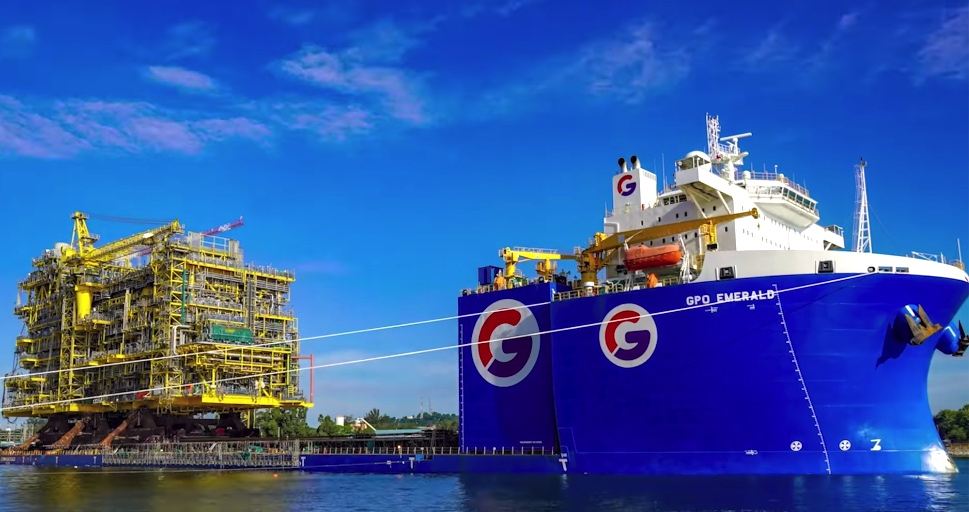