Video: Are Drones A Game Changer for Last Mile Deliveries?

Using drones, rather than launch boats can help reduce costs by up to 90% for vessel operators and ship managers.

Wilhelmsen’s research shows that the cost of launch boats is on average USD 1,500 per hire, but this can vary depending on port location and in certain ports costs per hire can amount to as much as USD 4,000. Drones on the other hand, the company estimates, could offer cost savings across the entire industry of up to USD 675 million.

Drone technology has proven its ability to speed up deliveries, slashing the lead times seen on traditional forms of last mile delivery.

Long lead times for the delivery of crucial spare parts, vital medicine or necessary documentation, results in time lost and increased costs. The use of fast and reliable drones will help ensure that vessels’ waiting time for deliverables is kept to a minimum. For example, the semi- autonomous drone types Wilhelmsen has reviewed for parcel delivery can reach a speed between 10 – 30 m/s.

Today, using launch boats typically requires the use of ropes, cranes and/or crew climbing onboard to hand over the parcels. Semi-autonomous drones are less labor-dependent, with a pre-programmed drone ensuring precise landing on the vessel’s deck for the seamless handover of important packages.

On May 4, Wilhelmsen decided to document one of its test flights to show how drone deliveries could take shape in the future.

To make the scenario as close to reality as possible the company simulated that a vessel had problems with a broken fuel pipe. The drone took off smoothly with a parcel weighing 1 kg. The whole process of mounting the package to the drone, take-off and dropping to the vessel took approximately 1 minute with a flight of 500 meters. Larger cargo vessels will typically have assigned landing spaces on deck for the drones to land, rather than the parcel dropping from the drone, the company explained.

Wilhelmsen expects the applications of drones to increase in a variety of industries in the years to come. Earlier this month, the company revealed plans to launch drone deliveries to vessels.

Wilhelmsen intends to launch a large-scale working pilot project in one of the world’s busiest ports in 2017, in spite of the complexity of global aviation rules and restrictions placed on unmanned aerial vehicles.

To see how drone deliveries to ships would look like in the future, check out the video below: 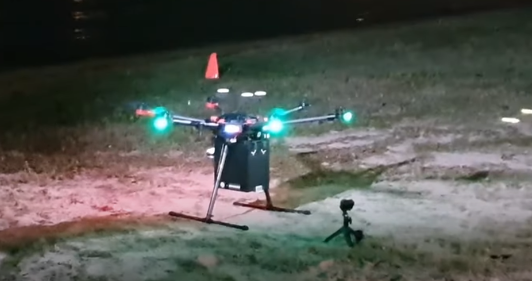