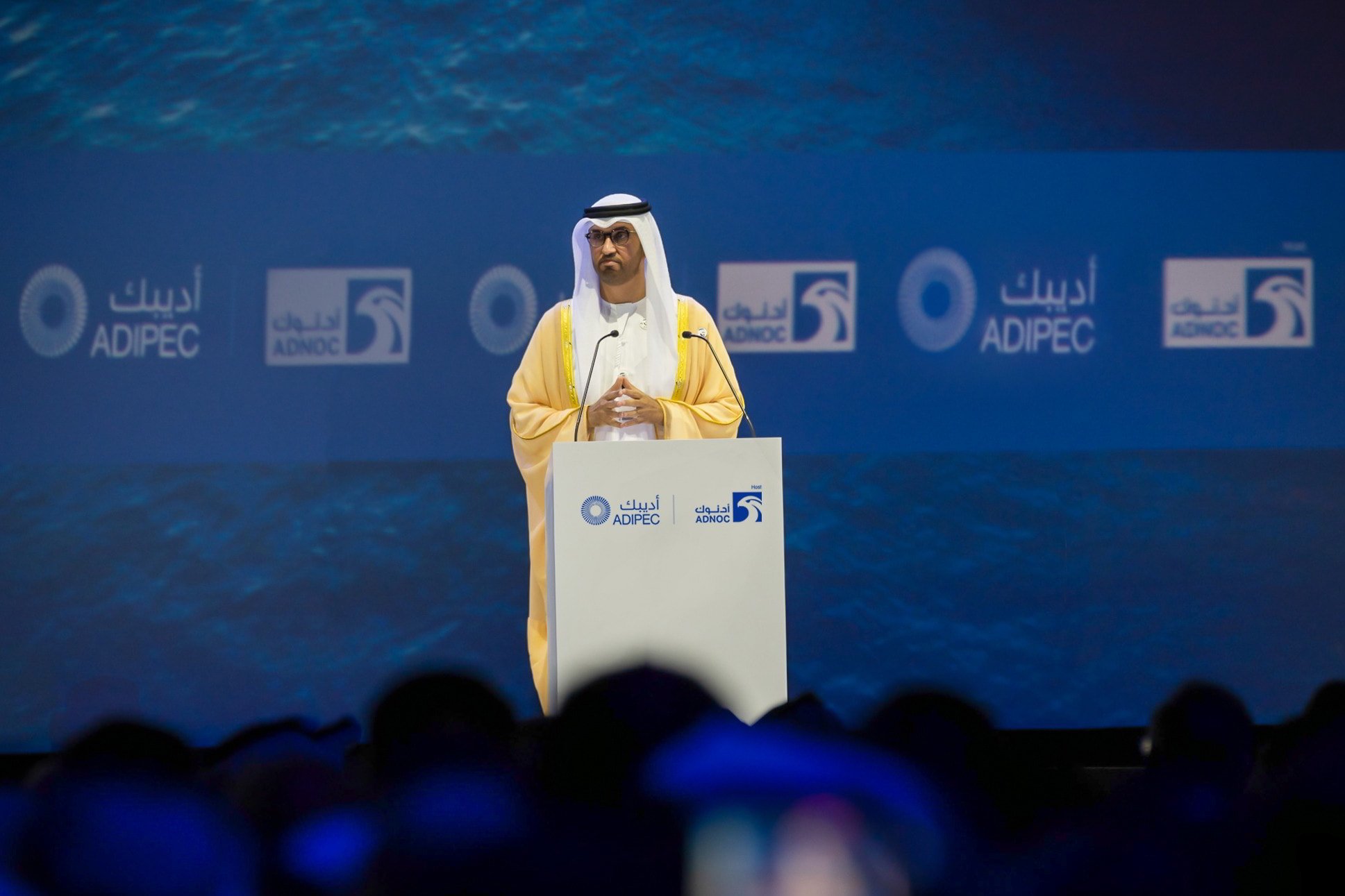 Back to overview
Home Fossil Energy With energy security in mind, ADNOC CEO calls for ‘maximum energy with minimium emissions’

Keeping the rising concerns over the global energy crisis at the forefront, the CEO of the UAE’s energy giant Abu Dhabi National Oil Company (ADNOC), believes that the world needs all the energy solutions it can get, including oil, gas, solar, wind, nuclear, and hydrogen to enable energy security. In addition, lower emissions are needed to address climate issues and ensure a sustainable energy future.

ADNOC disclosed on Monday that its CEO, Managing Director and Minister of Industry and Advanced Technology, Dr Sultan Ahmed Al Jaber, underscored the need for “maximum energy with minimium emissions” to ensure global energy security in his opening address at the 38th edition of the Abu Dhabi International Petroleum Exhibition Conference (ADIPEC), held under the patronage of the UAE’s president.

“If we zero out hydrocarbon investment, due to natural decline, we would lose 5 million barrels per day of oil each year from current supplies. This would make the shocks we have experienced this year feel like a minor tremor. If this year has taught us anything, it taught us that energy security is the foundation of all progress – economic social and climate progress,” added Al Jaber.

As this year’s ADIPEC is taking place against the backdrop of worldwide energy complexities, Al Jaber, who is also the Chairman of Abu Dhabi Future Energy Company (Masdar), highlighted in his speech that “energy is everybody’s top priority” as the global energy landscape goes through “a perfect storm.” ADNOC’s CEO underlined that this is not the time to point out that long-term under-investment in oil and gas has made a difficult situation even worse as “the data is clear.”

“The world needs all the solutions it can get. It is not oil and gas, or solar, not wind or nuclear, or hydrogen. It is oil and gas and solar, and wind and nuclear, and hydrogen. It is all of the above, plus the clean energies yet to be discovered, commercialized and deployed,” outlined Al Jaber.

Furthermore, Al Jaber went on to explain that the solutions the world needs are also “major opportunities” as the world is “on its way to being home to 9.7 billion people by 2050.” The UAE giant’s CEO claims that the world will need to “produce 30 per cent more energy than today” to meet the needs of these people.

“The world needs maximum energy, minimum emissions. This is why our leadership decided to be a first mover in renewable energy, over 16 years ago by launching Masdar. It’s why we were the first country in the region to deploy nuclear power. And it is why ADNOC is making today’s energy cleaner while investing in the clean energies of tomorrow,” pointed out Al Jaber.

While mentioning examples of the steps ADNOC is taking to decarbonise its operations, the company’s CEO further noted that the firm’s operations have been connected to zero-carbon nuclear and solar power. Al Jaber further outlined that ADNOC is electrifying its offshore operations to cut its carbon footprint in half while also “pressing down harder and harder” on its methane intensity, “even though we already have one of the lowest levels in the world.”

Moreover, Al Jaber predicts that technology will be “one of the greatest enablers of the oil and gas industry” moving forward, adding that “this is an area where the industry can amplify and accelerate its impact.”

To illustrate this point, ADNOC’s CEO said: “Take carbon capture and storage. It is one technology we can take to scale, not just in our industry but across all industries. And then there is hydrogen. Just a few days ago, I saw the first shipment of ammonia arrive from the UAE to Hamburg Germany. It felt like a historic moment. It was a first step in creating a hydrogen value chain and an important step in taking yet another opportunity for our industry.”

Bearing in mind that the COP27 meeting in Sharm el Sheikh will be held next week while the UAE prepares to host COP28, Al Jaber highlighted that global efforts should focus on “a new, bold, realistic and pragmatic pathway that benefits humanity, the climate and the economy.”

“We need to hold back emissions, not progress. The world is looking for solutions and I believe the energy industry can unite a divided world in finding them. I believe that the future is forged by those who make the first move. So today, I extend an open invitation to all our partners and friends around the world. Let’s make that move together and forge that future,” concluded Al Jaber.

When it comes to ADNOC’s most recent activities, it is worth noting that the UAE giant awarded a contract worth $1.53 billion to ADNOC Drilling in October 2022.

This deal was handed out to support the expansion of ADNOC’s offshore operations along with its objective to increase production capacity and meet the growing global demand for oil and gas.

Premium
In focus: ‘Maximum energy with minimum emissions’ to bring us safely to net-zero goals
Posted: 24 days ago
Eni and ADNOC looking into ways to strengthen energy security by expanding gas supply
Posted: 2 months ago
ADNOC Drilling, Halliburton, and SLB win new deals in UAE with total value of $4 bln
Posted: 27 days ago