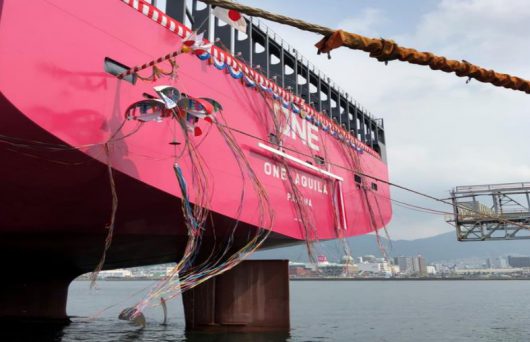 Ocean Network Express (ONE) has taken delivery of its third magenta coloured containership, the 14,000 TEU ONE Aquila.

The vessel was built by Kure Shipyard of Japan Marine United Corporation. The ship’s sublet owner is Nippon Yusen Kaisha (NYK), one of the three founders of ONE, the other two being K Line and MOL.

“Moreover, the vessel applies the duel system in its main engine which is capable to choose two other output ranges (high and low) that allows flexible operation and improved fuel-consumption rate, resulting in a significant reduction of carbon dioxide emissions. The navigation bridge has adopted the Integrated Navigation System (INS) which consolidates functions of vessel systems.”

The vessel joins 14,000 TEU-class vessel ONE Minato and the 8,542 TEU ONE Commitment, which were handed over to their owner in July and May 2018, respectively.

ONE Minato was built by Imabari shipbuilding while ONE Commitment, previously known as MOL’s Postpanamax containership MOL Commitment, underwent a makeover in Singapore, becoming the first boxship of the brand to boast the color.