After the tour, Drakeford said: “I was delighted to take part in the virtual tour of the Bombora Assembly Centre, home to the world’s most powerful wave energy device, mWave, being engineered and built in Pembrokeshire. This shows the manufacturing and resource capabilities of Pembrokeshire at its best.

“The Welsh Government is committed to the marine energy sector and supporting companies like Bombora. Wales can make a significant contribution to delivering renewable energy and there’s a huge potential to build a thriving industry and create jobs in regions where skilled employment has been in short supply.

“Renewable energy is at the heart of our vision for Wales’s future and generating sustainable marine energy from our abundant natural wave and tidal resource is an essential step towards creating a low carbon economy”.

Bombora’s 1.5MW mWave Pembrokeshire Demonstration Project aims to place Pembrokeshire at the forefront of the wave energy industry. At the same time, the project serves to build new and sustainable industry engaging the existing supply chain and creating highly skilled employment opportunities both today and for future generations.

Over 50% of the current Pembrokeshire Demonstration project is supplied from the local supply chain indicating great potential for the region, according to Bombora.

Sam Leighton, Managing Director of Bombora said: “We were delighted to have an opportunity to showcase our progress on this significant renewable wave energy project to the First Minister. Our team of four has quickly grown to 29 demonstrating our strong commitment to the region. Bombora has ambitious growth plans that will see significant additional inward investment to Wales and result in further job creation and export opportunities”.

Drakeford was keen to stress that the Welsh government would continue to make the case to UK government to support energy production from the ocean.

A clear commercialisation pathway is required for the emerging marine energy industry, similar to support received by the wind and solar industries as they scaled up operations, Bombora said.

Jess Hooper, Programme Manager at Marine Energy Wales, the industry body representing the sector, welcomed the First Minister’s continued support saying: “The businesses, activities and support that we have here in Wales are enabling the marine renewable sector to grow to the benefit of Wales. Technologies like Bombora’s mWave further the opportunity for a diverse and resilient energy mix, that we can call home-grown and export to the world”.

Bombora moved its headquarters from Australia to Wales in 2017 to build and test its technology at full scale in Welsh waters. Bombora’s operations are supported by a European Regional Development Fund through the Welsh Government.

The company has recently signed partnership agreements with major multi-nationals that will help drive future product demand. In response, the wave energy company intends to consolidate and grow their operations by establishing the Bombora Assembly and Export Centre within Pembroke Dock.

The facility will initially support the operations of the £20 million 1.5MW Pembrokeshire Demonstration Project, and then be scaled to provide mWave power modules to Bombora’s global marine energy projects.

Take a look below at the short clip of the video tour provided by Bombora. 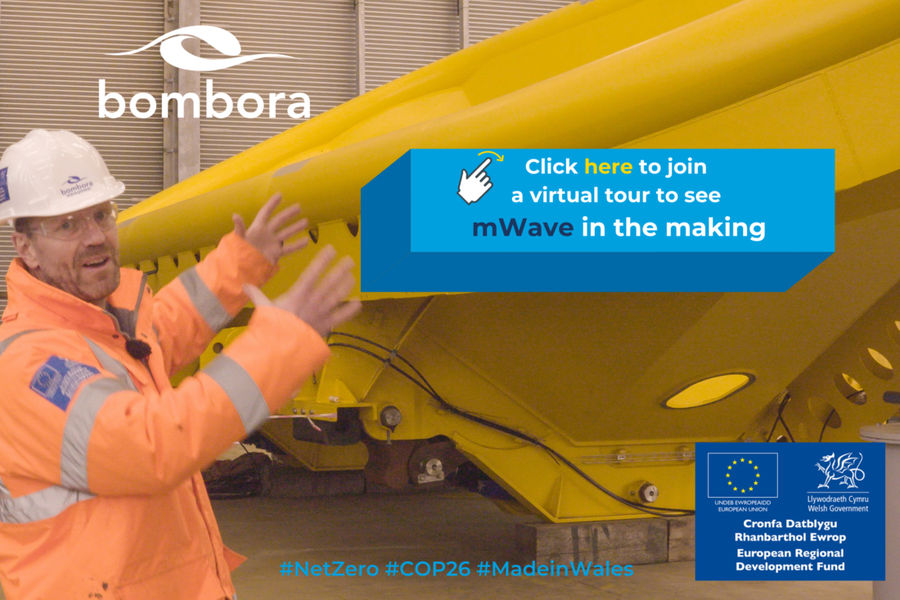