The Northeastern Regional Association of Coastal Ocean Observation Systems (NERACOOS) will host and post the data that will be generated from the Bourne Tidal Test Site in Cape Cod Canal, Massachusetts.

The data will be available to professionals, students, and the public on the NERACOOS web site that already hosts data coming from many sources in New England waters, the Marine Renewable Energy Collaborative (MRECo) informed.

Bourne Tidal Test Site (BTTS), which is currently undergoing permitting process, will, once constructed, be the permanent test stand for tidal energy in the United States, comprised of a fixed test structure located approximately 10 m south of the west end of the railroad bridge in the Cape Cod Canal.

“It’s a perfect way for us to get the help we needed to provide the current speed, underwater video and power potential data to teachers, students and others who are developing turbines for similar sites,” said Maggie Merrill, MRECo’s Communication and Education Outreach Manager.

It is anticipated that turbines of up to 3m in diameter will be tested with maximum output of 100kW.

The test structure itself will consist of two pilings joined by a bridge with test turbine mounted onto the bridge.

The initiative has received financial backing from the Massachusetts Seaport Economic Council earlier this year, and it is expected that the infrastructure installation activities will start by late October, or early November this year, MRECo said.

MRECo is a nonprofit corporation whose purpose is to foster the sustainable growth of marine renewable energy, including wave, tidal, and offshore wind sectors of New England through education, collaboration, and demonstration. 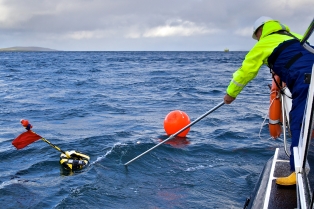